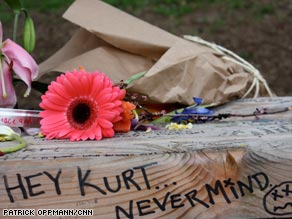 Fans leave flowers and mementos in honor of Kurt Cobain near his Seattle home.

"I miss your beautiful face and voice," one dedication reads.

"Thank you for inspiring me," says another.

Fifteen years ago Wednesday, at a house adjacent to the park, Kurt Cobain's dead body was discovered by an electrician.

The Nirvana frontman, 27, had committed suicide, police later ruled, killing himself with a shotgun while high on heroin and pills.

His death ended a battle with hard drugs and added Cobain to a long list of legendary musicians, such as Jimi Hendrix and Janis Joplin, whose careers were cut short by their addictions.

Cobain's ashes were reportedly scattered in a Washington state river and a New York Buddhist temple.

What was unclear when Cobain died was whether the music Nirvana created would endure or fade away like the grunge craze it helped to inspire.

"At one point I thought, 15 years on, no one would really know who Kurt Cobain was outside of a group of diehard fans," said Jeff Burlingame, a Cobain biographer who grew up with the musician in Aberdeen, Washington, and knew him when he was a teenager who, without a place to sleep, crashed on mutual friends' couches.

But Nirvana's music endured, and Cobain even found fans in his hometown of Aberdeen, which he had derided as a small-minded town.

"The old-timers who were there when Kurt was around really took offense to some of the things he said about the area, so they had no real reason to honor him," said Burlingame, who co-founded the Kurt Cobain Memorial Committee.

A famous son is a famous son, though. Now, visitors arriving in Aberdeen are greeted with a sign that reads "Come As You Are," after a famous Nirvana song.

Cobain Memorial Committee members, who include Cobain's paternal grandfather, hope to establish a community center in the late rocker's honor that would give area youth a place to play music and pursue artistic interests.

A concert will be held Friday in Seattle to honor Cobain and raise money for the center.

When Cobain died, he left behind a fortune that was estimated in the millions.

Even more money poured in over time from the royalties from his songs. But a lawyer hired by Love, Rhonda Holmes, says most of that money is missing.

According to Holmes, Love recently discovered that "managers, assistants, CPAs, lawyers, people like that who were supposed to be entrusted with carrying for their well-being and finances basically looted the estate."

Forensic accountants are now trying to determine where tens of millions of dollars from Cobain's estate ended up and how it could be recovered, Holmes said.

All About Kurt Cobain • Courtney Love