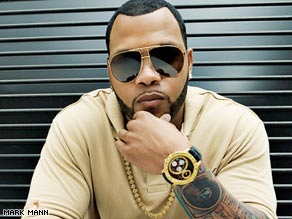 Flo Rida's latest single, "Right Round," was No. 1 on Billboard's pop chart for 10 weeks.

In an attempt to reach his fan base on a more intimate level, the Floridian rapper has made his personal cell phone number public.

"If they can go out and buy my albums, I can at least make the sacrifice to holler at the few people who call," he says. "A lot of times I'm busy so they'll get my voice mail. And if I can speak to them and I have time, I always text back. Because I think that's very important."

To prove that the number he shared on camera during our interview was the real deal, he showed CNN his iPhone. The device was on overdrive, constantly lighting up and vibrating with an influx of texts and calls.

"Yo this is your boy Flo Rida," he said to one caller. "What's your name? What's good?"

But it was too much for the person on the other end -- he or she hung up before uttering a response.

"Most of them hang up," says Flo Rida (real name Tramar Dillard). "They don't think it's really me."

So how many calls and texts does a top-selling, in-demand rap star actually respond to?

He's also breaking his own records: His new single "Right Round" sold more than 636,000 downloads in the week after its release. It also hit No. 1 on Billboard's Hot 100 pop chart.

"Right Round" features singer Kesha and borrows an infectious sample from the Dead or Alive hit "You Spin me Round (Like a Record)." It can be found on Flo Rida's sophomore album, "R.O.O.T.S." (Atlantic), which dropped last week, only a year after the release of his debut album, "Mail on Sunday."

Flo Rida is also scheduled to be a guest on Wednesday night's "American Idol."

Flo Rida talked to CNN about having to record music while on the road, keeping in tune with his international fans, and being a shy guy (yeah, right!). The following is an edited version of the interview.

CNN: In "Right Round" you sample the '80s group Dead or Alive. Are you a fan of '80s music? Or [do] you just like that song in particular?

Flo Rida: I grew up [with] seven sisters so I listened to all types of music. And Dead or Alive was one of the records in particular that I've heard. But my A&R [man] Mike Caren actually brought it to my attention. Me putting out a sophomore album, I thought I'd broaden my horizons, show people my growth, so I got in the studio with Dr. Luke, who's the producer of the song, and we made history.

Flo Rida: Yeah. I'm the youngest. And I have a twin sister. I'm a twin.

CNN: What do you mean by "struggle"?

Flo Rida: I was definitely inspired by the fact that I had a chance to go to Africa recently, did the MTV Awards there. ... But going back to my neighborhood, you know, I had a lot of struggling, too, where it was a lot of drug dealing around me, killing. ...

But my mom always instilled in me to keep the faith, dream big and that's what I did. I was a great follower of my mom, very loyal and everything. And right now I'm happy that the world looks at me as a great leader as far as me doing my music and coming with a positive approach.

CNN: Your first hit song, "Low," broke digital sales records. How did that change the pace of your career?

Flo Rida: We had to hurry up with the album and put it out because we definitely want to keep the attention on the fact that we have a No. 1 record, and let that follow into having a No. 1 album. I'm definitely happy that on this album versus the last, there's more substance so at the same time the fans get a feel of me ... where I come from, how I got the success as well as me being the life of the party. They can continue to have a smile on their faces around the world. Hit the dance floor, shake it off, put your hands in the air and ... the hot ladies have my head spinning right round so I definitely had to get that album out.

CNN: It has barely been a year since you released your debut album, so you're really striking while the iron's hot. Are you putting this pressure on yourself or is it mainly coming from outside forces?

Flo Rida: The most pressure came from traveling. I actually found myself in hotel rooms in the bathroom, whether I was in Japan or in Sweden, recording records, trying to get an acoustic sound. I definitely worked hard ... it was just a challenge as far as time goes, with me doing two -- sometimes three -- shows a night for two weeks straight.

I enjoy doing all the shows and performing, but at the same time all that work -- and trying to put out an album -- was definitely hectic.

CNN: You've worked hard to build up your overseas fan base. Why is having a global audience important to you?

Flo Rida: It's very important ... the loyalty that they have overseas. You have a No. 1 record in almost 12 different countries: To me, that's like having nine lives. Most people don't even have an idea that you can really sell music overseas.

I always love the fact that I can do things internationally. When I was going to school I took the approach that I wanted to take international business versus just taking business classes. So I always had that approach prior to me doing music.

CNN: Are you surprised by how responsive the rest of the world is to American rap?

Flo Rida: Most definitely. Sometimes they don't even know the language, and they can repeat a song.

CNN: Some might say that your music is less rap and more good-time club jams. Would you agree with that?

Flo Rida: People can have their own thoughts of what they think it is. But for the most part I'm happy that they know it's music.

CNN: What kind of feedback do you get when you have a hit record? What do people tell you they like about it?

Flo Rida: At this moment everybody wants to be a rock star, so it has that vibe in it. The way I ride a beat definitely gets everybody's attention. And in using a Dead or Alive sample intertwined with what's going on here in the new millennium is definitely what catches everyone's attention.

CNN: What's your dream collaboration? Who would you really like to work with?

Flo Rida: Andre 3000. I've always been a fan of OutKast. Every time they drop an album they step it up a notch. And there's a lot of diversity between Andre and Big Boi.

CNN: What is the quirkiest thing about you?

Flo Rida: Most people see me on stage and they think that I'm this crazy dude, but for the most part I'm a little shy and laid back.