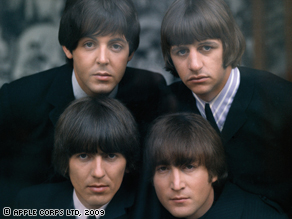 The Fab Four will be made even more so when the remastered Beatles catalogue is released in September.

Apple Corps Ltd. and EMI Music have announced that as the date for the release of the entire original Beatles catalogue, digitally remastered.

That includes all 12 Beatles albums in stereo, with track listings and artwork as originally released in the UK. The package will also contain the LP version of "Magical Mystery Tour" (initially released as a double-EP in Britain, though available on CD since 1987) and the collections "Past Masters Vol. I and II" combined as one title.

The release marks the first time that the first four Beatles albums are being made available in their entirety on compact disc, and it also coincides with the release of "The Beatles: Rock Band" video game.

Robert Levine, executive editor for Billboard, said the timing is genius in terms of marketing.

"Most bands, when they do a big project like this they pay for publicity," Levine said. "The Beatles got paid for 'Rock Band' and then they are using that for publicity to rerelease a catalogue. It's pretty amazing." Blog: A Beatles fan reflects on the news

Levine pointed out that media have evolved tremendously since 1964, when the band first burst onto the American scene with an appearance on "The Ed Sullivan Show."

Back then, there were only three major television networks, and engineering of albums was much less sophisticated, Levine noted. Previous rereleases have sold well in the past -- indeed, Beatles albums have sold steadily for decades -- and Levine said he expects this one to do even better.

"I think if you were to look at pure catalogue, old bands selling old albums, the Beatles are the kings -- commercially as well as artistically," Levine said. "A lot of [music] has been remastered better in the past 22 years, and remastering technology has come a long way."

Piers Hemmingsen, the author of two books on Beatles music and head of the Web site Capitol6000.com, said there has long been a clamor among fans for good, high-quality versions of Beatles songs.

"The technology that was available back then was very limited, and with the newer technology they are able to do far more with what they have than they have ever been able to do before," he said. "For people who are plugged into iPods and the whole digital music scene, it's going to be a lot better for them."

In acknowledgment of the more technologically advanced listeners, each CD will contain, for a limited time, an embedded brief documentary film about the album.

The remastering project was four years in the making. Engineers used de-noising technology and cleaned up glitches like electrical clicks and microphone vocal pops, so long as it didn't affect the original integrity of the songs.

They also slightly boosted the volume levels. Andrew Croft, publisher of Beatlology Magazine, said the announcement of the release of the remastered recordings "is long overdue in the Beatles community and for music fans alike."

He also said the quest to improve the original recordings is not new.

Croft said bootleg releases over the years used rare and obscure vinyl pressings from countries like Japan and Germany to compile the best of the best recordings of The Beatles songs, presenting to the public a better sound that Apple could not offer prior to the remastering.

"While the new remasterings will replace a library full of bootlegs of their commercial releases, there remains a massive market for their more obscure tracks, outtakes and live performances," Croft said.

The 14 remastered albums, along with a DVD collection of the documentaries, will also be available for purchase together in a stereo boxed set.

A second boxed set, "The Beatles in Mono," includes all of the Beatles recordings that were mixed for a mono release. It will contain 10 of the albums with their original mono mixes, plus two additional discs of mono masters (covering similar ground to the stereo tracks on "Past Masters").

The mono "Help!" and "Rubber Soul" discs also include the original 1965 stereo mixes, which have not been previously released on CD. These albums will be packaged in mini-vinyl CD replicas of the original sleeves with all of the original inserts and label designs.

Even with the release date, what is old has become new.

Diehard Beatle-ologists may take note that the release date could be viewed as a nod to the Beatles track "One After 909" from the "Let It Be" album -- or a reference to the White Album's "Revolution 9." (John Lennon, who was born on October 9, occasionally talked about his fondness for the number 9.)

Hemmingsen said making the music more accessible and attractive to a younger audience helps spread Beatlemania to a new generation.

"Their music is catchy, memorable, interesting and listenable," said Hemmingsen, who was a youngster in England when the Beatles hit the scene and has been a fan ever since. "The time that they evolved their music was an interesting time and their music reflected that time."

Levine said the band has always captured fans from across generations.

"The songs have lasted for a long time because they are great songs," he said. "It's just that simple. Those are amazing, amazing albums."