What will happen to T.I.'s career? 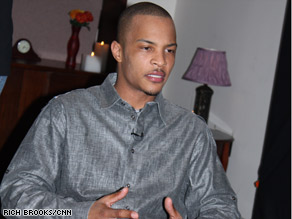 But when rap star T.I. disappears from the hip-hop scene to complete his one-year, one-day sentence in federal prison, several music experts say, that won't be the case.

The self-proclaimed "King of the South" will be sticking around, thanks to the success of his most recent album -- the double-platinum, Grammy-nominated "Paper Trail," released last September -- his community service efforts and a reality show on MTV that has resonated with fans, they say.

"I think that if anything, it will gain him more fans and actually support his fan base, because he's talked about making a mistake," said Emil Wilbekin, editor in chief of Giant Magazine, which focuses on urban music and lifestyle and featured T.I. on its November 2008 cover. "He's talked about taking care of the error of his ways."

T.I., whose real name is Clifford Harris, was sentenced to prison in federal court in Atlanta, Georgia, last week on weapons charges. He will be taken into custody no earlier than May 19.

In addition to serving prison time, the court asked T.I., 28, to pay a $100,300 fine on weapons charges related to purchasing machine guns and silencers.

"I would like to say thank you to some and apologize to others," Harris said at his sentencing Friday. "In my life, I have been placed in the worst-case scenario and had to make the best of it."

Though he had been in legal trouble before, Harris' current situation began when he was arrested just hours before he was to perform at the BET Hip-Hop Awards in Atlanta.

The rapper had provided a bodyguard with $12,000 to buy weapons. Harris was not permitted to own any guns, however, because he was convicted in 1998 on felony drug charges -- possession of crack cocaine with intent to distribute -- in Cobb County, in suburban Atlanta.

After his arrest, he entered a plea agreement, which federal authorities called unique because it allowed the rapper to remain out of prison for a year while he performed community service.

Harris has already left a strong mark on the hip-hop genre, music experts say, which should position his career well when he is released. Harris had been named to the Forbes list of top-earning rappers, making an estimated $16 million in 2006.

His fan base has expanded in the last year, with some of the growth due to "Paper Trail," which has sold close to 2 million copies, according to Nielsen SoundScan.

This year, Harris went on to star in the MTV reality show "T.I.'s Road to Redemption: 45 Days to Go," which chronicles his efforts to shave years off his sentence by completing his community service. The show features him talking to schools and community groups "about how to avoid the trouble he now finds himself in," according to the network's Web site.

To keep Harris in the spotlight, Jason Geter, part owner of Harris' record label Grand Hustle Entertainment, said the company will release a remixed copy of "Paper Trail" with five new songs this summer. He says Harris is shooting music videos set to be released when he is in prison.

"We come from a world if you don't work, you don't eat," Geter said.

In addition to music, Harris' television production company Grand Hustle Productions, which produced the MTV reality show, is filming a second reality television series for MTV about celebrity racing. Also, in the heist film "Takers," produced by Screen Gems and set for release in January 2010, Harris will appear alongside actor Matt Dillon.

And Grand Hustle Entertainment officials say Harris' clothing line for young men, AKOO, will continue to be available in stores.

Geter said that even in prison, his partner Harris will stay focused on his career.

"His [Harris'] music reflects his experiences," Geter said. "He makes himself vulnerable, and that's why people like him so much. And people always love to hear a good drama."

Music experts say Harris' fans are an extremely dedicated group that will probably remain loyal until his release. They say that since fans have known for more than a year that their celebrity rapper would be facing jail time, they have had time to prepare for his departure and the decision doesn't come as a shock.

Furthermore, experts say, one year is too short of a time to forget such a popular artist.

"This will give him some time to do some great thinking and creating," said Gail Mitchell, senior correspondent for R&B and hip-hop at Billboard. "This time around, he is going to be OK."

Stacey Richman, a New York-based attorney who has worked with hip-hop artists such as Jay-Z, DMX and Ja Rule, said there is some threat that going to prison may cause a artist to burn out. But she adds that properly managed talent can help the artist survive.

"It comes down to where he stands in his career," said Richman, who has been practicing law for nearly two decades.

Prison time can, perhaps ironically, serve to raise the profile of some hip-hop stars. A handful have been able to resume their careers at an even higher level after concluding their sentences.

One of the most infamous examples involved 2Pac, also known as Tupac Shakur, who entered prison in 1994 on a sex abuse conviction. In 1996, after his prison stint, he released his album "All Eyez on Me," which had sold 9 million copies by 1998, according to the Record Industry Association of America, a trade organization representing the U.S. recording industry. It was the first double-disc album of original material in hip-hop history, according to Billboard.

More recently, Grammy-winning rapper Lil' Kim, also known as Kimberly Jones, is making her comeback on the popular ABC reality show "Dancing With the Stars." She served a year in prison after being convicted of perjury in a federal case involving her friends and a 2001 gunfight in New York City. She has not released an album since leaving prison.

But incarceration doesn't promise success. Rapper Foxy Brown spent eight months in prison for violating her probation; her first post-incarceration album, "Brooklyn's Don Diva," was given mediocre reviews and floundered in sales. It has sold only about 30,000 copies, according to Nielsen SoundScan.

Hip-hop artist Jamaal "Shyne" Barrow, who was sentenced to 10 years in prison for two counts of assault and a list of other charges for involvement in a much-publicized New York City nightclub shootout with Puff Daddy and Jennifer Lopez, released an album while incarcerated in 2004, "Godfather Buried Alive," that struggled to make a splash on the charts.

Since his plea agreement, Harris has worked to differentiate his personal life from his rapper image. In multiple interviews with the media, he often mentioned that he is a father of five who lost a daughter to a miscarriage in 2008. His best friend died at a post-party shooting, which he says was the motivation for arming himself.

"Most often, things I have learned have been from trial and error," Harris told CNN. "I knew no way to protect myself than to arm myself."

In Harris' latest single, "Dead and Gone" with Justin Timberlake, the lyrics indicate a changed Harris, trying to shed his previous image. He writes in the song that the "old me is dead and gone."

The fan support for Harris continues to pour in since he received his sentence Friday. On Facebook.com, one fan, Hendrick Garner in Tupelo, Mississippi, wrote, "Like you said this [is your] defining moment, and I think we all have had that moment, but it only makes us stronger."