Decision on Madonna's adoption due Friday

(CNN) -- Madonna will hear Friday whether she will be allowed to adopt a child from Malawi, a spokeswoman for the African nation's attorney general told CNN Monday. 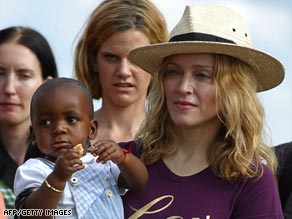 The singer was in court in Malawi, one of the poorest nations in the world, on Monday for a hearing in the case, said Zione Ntaba, press officer for the country's Attorney General's Office. The judge read documents and questioned the parties, the spokeswoman said.

Madonna should appear in person Friday to hear the judge's decision, Ntaba said.

The child Madonna is seeking to adopt is named Chifundo James, she confirmed. "Chifundo" means "Mercy," the name earlier reports have cited for the girl, Ntaba added.

An uncle of the girl was scheduled to sign adoption papers Monday, according to Martin Geissler, a reporter for the ITN television network who is in Malawi, but he does not appear to have been in the court.

The child's family will have to give their permission for the adoption to proceed, Geissler said, but need not be physically present in the court to do so.

Madonna arrived at the court Monday morning in a convoy of four SUVs with black-out windows, Geissler said from the capital Lilongwe. Eight security guards prevented journalists and the press from getting too close to the 50-year-old singer.

Chifundo James is reported to be 4-years-old. She has two uncles and a grandfather, who were not in court Monday, Geissler said.

An international charity has criticized Madonna's plan to adopt the child.

"The best place for a child is in his or her family in their home community," spokesman Dominic Nutt of Save the Children said in a statement. "Most children in orphanages have one parent still living, or have an extended family that can care for them in the absence of their parents."

The charity argued that foreign adoptions should happen only if a child does not have any relatives, and all other options have been considered.

Under Malawian law, foreign adopters would have to spend a year or more living in the African country with the children they want to adopt, Geissler said. The rules were put in place to prevent child trafficking.

The purpose of the law, Ntaba explained, is for the authorities to observe the prospective parent to make sure the relationship is not abusive -- "that the parent will behave well around the child," she said.

She said that American or British social services may also provide the monitoring and in the case of David Banda, the first Malawian child Madonna adopted, Malawi social services officers traveled to the United Kingdom to visit the child in Madonna's home.

The judge has the discretion to allow Madonna to take the child home with her immediately, Geissler said. She is scheduled to leave Saturday, he said.

Madonna adopted David Banda from Malawi in 2006. She has two other children.

"Madonna first came into contact with her a few years ago and fell in love with her," he added. "She has always had in mind that this is the girl she was going to come back and adopt."

Madonna has been involved with Malawi for several years. She made a documentary, "I Am Because We Are," which highlighted poverty, AIDS and other diseases devastating Malawi's children. She also helps run a nonprofit, Raising Malawi, which implements initiatives to help the needy in the southeastern Africa nation.

On Sunday, Madonna arrived in Malawi and toured the village of Chinkhota, assessing plans to build a school there and other possible Raising Malawi investments.

Do you think Madonna should be allowed to adopt another child?