LOS ANGELES, California (CNN) -- Singer Chris Brown has recorded a song with his girlfriend, Rihanna, after charges were filed against him for allegedly assaulting her, a source close to the record's producer, Polow Da Don, said Thursday. 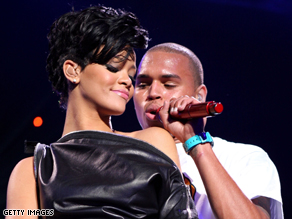 A music producer says Rihanna recorded a duet with Chris Brown, who is accused of assaulting her.

The source, who did not wish to be named because she was not authorized to speak on the matter, did not have any further details

"My heart goes out to both Chris and Rihanna for what has happened in the past," Da Don said in a statement. "They are both great artists to work with, and I wish them well."

A police statement said the incident began when Rihanna, whose full name is Robyn Rihanna Fenty, found a text message on Brown's cell phone from "a woman who Brown had a previous sexual relationship with," according to court documents released last week.

Brown issued a public apology to his fans last month.

"Words cannot begin to express how sorry and saddened I am over what transpired," he said in a statement released by his spokesman. "I am seeking the counseling of my pastor, my mother and other loved ones, and I am committed, with God's help, to emerging a better person."

When Brown made his first appearance in court last Thursday, Rihanna's lawyer asked the judge not to prohibit him from having contact with her while he faces the charges.

Media reports have said the couple has reunited since the alleged incident; spokespersons for both have neither confirmed nor denied it.

Watch some tough love for Rihanna »

Brown is due back in court on April 6 for his formal arraignment. If he is convicted, he could face as much as four years and eight months in prison, the Los Angeles County District Attorney's Office said.

The case has been moved to L.A. County Superior Court Judge Patricia Schnegg who signed the search warrant in the case.

Brown's attorney, Mark Geragos, requested a prearraignment hearing which is scheduled for March 23 in Schnegg's chambers. Brown is not required to be at the hearing. iReport.com: Chris Brown fans: Share your reaction

On Wednesday he withdrew his nominations for two Nickelodeon Kids' Choice Awards, a spokesman said. Brown, 19, had been nominated for "Favorite Song" and "Favorite Male Singer."

"Unfortunately, the controversy surrounding the incident last month has shifted the focus from the music to whether he should be allowed to be among those nominated," the spokesman said in a written statement. "While Chris would like to speak to his fans directly about this and other issues, pending legal proceedings preclude his doing so at this time. Once the matter before him has been resolved, he intends to do so."