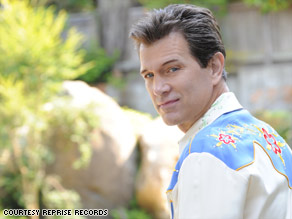 Not a dazzle-eyed dame hoping to be serenaded by the hunky crooner (and yes, at 52, he's still hunky). No, curled up on Isaak's knees is a beady-eyed, shaggy-haired Maltese terrier named Rodney.

But Rodney's not your average lapdog. No sir, this four-legged critter is as versatile as they come, serving as the "Wicked Game" singer's travel companion, sounding board and, most recently, TV co-host.

Rodney is Isaak's regular sidekick on the singer's "The Chris Isaak Hour," which debuted on The BIO Channel last week. The show airs Thursdays at 10 p.m. ET.

Isaak isn't afraid of deferring to his, uh, friend -- "Rodney is not 'my' dog, because you can't own a living thing, OK," he says. "We're friends" -- and talks to him after breaking into song.

"How was that, Rodney?" Isaak asks the pooch.

If all this sounds offbeat, it's par for the course for Isaak, who starred in Showtime's faux-reality "The Chris Isaak Show" from 2001-04. His new show finds him in late-night territory as he interviews and performs with fellow musicians like Trisha Yearwood, Michael Bublé and Smashing Pumpkins.

Isaak also has a new album -- called "Mr. Lucky" -- which came out last week to coincide with his new TV project. With his music, he covers familiar territory, using his Roy Orbison-like wail to describe a broken heart or insinuate some dirty business.

So, despite his self-deprecating wit, maybe this laid-back surfer dude is fooling us. Has his heart been broken more than the average Joe's?

"I don't think I've had a more miserable life than a lot of people. I think I've had a pretty lucky life," he says. "It's just [that] I complain more. And I sing about it. When a banker has his heart broken, he doesn't go out and sing a love ballad. He finds a family, and he evicts them. It's like, 'Get out of my house! She broke my heart! Now get out!' "

Isaak (and a very subdued Rodney) spoke to CNN about how his show differs from Elvis Costello's similar show "Spectacle," being compared to another Elvis and how "cushy" his job is. The following is an edited version of the interview.

Chris Isaak: Well, for one thing, I get to meet a lot of musicians ... that I really admire. Glen Campbell is somebody who I grew up watching on TV, and I always thought he was talented. And there I am, jamming with Glen Campbell!

[Trisha] Yearwood, Stevie Nicks, Michael Bublé, Chicago, Cat Stevens, Smashing Pumpkins ... Every week was like Christmas for me. Well, a terrifying Christmas, because I had to interview people, and I was always worried that I wouldn't be prepared. But we share a lot of the same background.

CNN: But you still had to do your homework, didn't you?

Isaak: I did, because I don't want to be that guy that goes on TV and goes, " 'Caught in the Flames' ... that's a funny name for the title of an album." And they go, "My family burned to death in that fire." And you go, "Oh, I guess I should've read the notes."

CNN: Have you been asked stupid questions like that before?

Isaak: When people ask me really stupid questions or get it really wrong, I feel embarrassed for them. I don't really feel angry at them. Usually the questions I get are, "You look a bit like Elvis. Do you like Elvis?"

CNN: What did you learn about [Yusuf Islam, once known as Cat Stevens]? Anything surprising?

Isaak: Yeah, he has a sense of humor. To a lot of people, when they hear somebody's religious or they've given their life up to search for something bigger than rock 'n' roll, people are scared by that, and they walk softly around that person. They think, "Are they going to take offense?" But Cat Stevens was pretty mellow.

CNN: Unlike Elvis Costello's talk show on the Sundance Channel, you do yours without a live audience. Why is that?

CNN: So that's why there isn't an audience?

Isaak: No. Elvis Costello is a genius. I think people would say musically, he's a genius. And I think when the network hired me to do my show, we wanted to cover that other ground. So he's got the genius area covered, and I do the other stuff.

Isaak: Yeah, I'd be the non-genius.

CNN: What is the toughest thing about being in the music business right now?

Isaak: There's not a damn thing tough about it. That's why I called my album "Mr. Lucky." Maybe this isn't the height of the music business. Everybody's having a tough time, economics are bad all over. But it's a wonderful job, and it's been so cushy compared to other things I could've done.

CNN: So what do you like about this album?

Isaak: Well, I better like it. I wrote all the songs! I think it's a good record. It's got pretty love songs, and it's got upbeat songs and positive stuff. And you put it on and go about 90 miles an hour, and it'll take you for a long, beautiful ride.

CNN: Are you a hopeless romantic?

Isaak: No I'm a hopeful romantic. In a couple of drinks, I'll be a lucky romantic. That's why they call me Mr. Lucky.

CNN: Were you surprised when "Baby Did a Bad, Bad Thing" was used in "Eyes Wide Shut"?

Isaak: I found out about it because I was doing ... "The Tonight Show" and somebody called and said, "There's a film director who wants to use your song, and he needs to know very soon." And I go, "What's the film?" And he said, "I don't have the name." I said, "Can you send me the script?" "No."

But later on I heard that it was Nicole Kidman who actually was the one who helped get that song out there. She was going to do a love scene ... kind of a naked seduction dance. And they said, "What would you feel comfortable dancing to?" And she said "Baby Did a Bad, Bad Thing." I was disappointed because ... I would've gone down during that scene and played for free. Because that's the kind of a guy I am. A heart as big as a jail. Always supporting the arts.

CNN: What did baby do in that song?

Isaak: Just about everything. And I still have a rash.