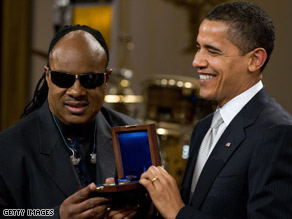 President Obama says if it wasn't for Stevie Wonder's music, he and the first lady may not have dated.

"I think it's fair to say that had I not been a Stevie Wonder fan, Michelle might not have dated me. We might not have married," Obama said Wednesday as he and the first lady hosted a concert and award ceremony for Wonder. "The fact that we agreed on Stevie was part of the essence of our courtship."

Wonder was presented with a Gershwin Award for lifetime achievement during the event, which is scheduled to air on PBS Thursday.

The president told guests at the White House that Wonder's music was also the soundtrack to his youth and marriage. Michelle Obama told the crowd that Wonder's love song, "You and I," had been the couple's wedding song.

Watch Stevie Wonder and other greats jam at the White House »

Wonder accepted the award from President Obama and gave him a big hug.

"President and Mrs. Obama, I'm so excited to know that I was a part of. ... I needn't say more," Wonder said, drawing laughter and applause. "I want to first of all thank God for this moment, because only through him could all this happen."

Gospel duo Mary Mary, hip-hop musician will.i.am and jazz crooner Tony Bennett were among the other performers at the event. Obama staff members said the event was part of an effort to open the White House to a broader community.