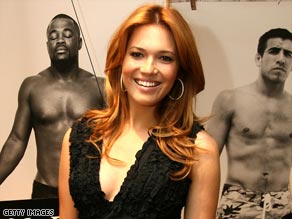 Mandy Moore has been with Ryan Adams for about a year.

Moore's publicist confirmed Thursday the 24-year-old singer-actress is engaged to marry Adams, 34, who is known for producing rock music with a country influence.

Rumors first surfaced almost a year ago that Moore and Adams were dating as paparazzi photos surfaced of the couple out together in Los Angeles.

Moore's role as a bride in the 2007 movie "License to Wed" may help her as she moves toward the altar.

The romantic comedy featured Robin Williams as "Reverend Frank," who put Moore's character and her fiance through a "marriage preparation course" before they could get hitched in his church.

Her first success as a recording artist came in 1999 with her debut album, "So Real," which went platinum with the help of her top 10 single "Candy."