LOS ANGELES, California (CNN) -- The investigation into what happened between singers Chris Brown and Rihanna on a Hollywood street early Sunday remained in the hands of police Wednesday, a day after the Los Angeles District Attorney's Office said it needed more information before deciding on formal charges. 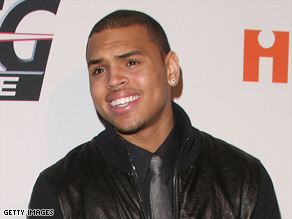 A spokeswoman for the prosecutor said Brown, 19, was arrested and booked on suspicion of making criminal threats.

He was released from jail on $50,000 bail Sunday night and given a March 5 court date.

Brown's lawyer has not responded to repeated requests for comment.

Police said Brown and a woman were in a vehicle near Hollywood's Hancock Park early Sunday when they became involved in an argument.

Watch the latest about the case »

Police did not identify the woman, but sources close to the couple told CNN the alleged victim was his girlfriend, Rihanna, 20.

Rihanna -- whose full name is Robyn Rihanna Fenty -- has made no public comment and her spokesman issued only a short statement Sunday evening after she canceled her performance at the Grammy Awards.

"Rihanna is well," her spokesman said. "Thank you for concern and support."

She was scheduled to be in Malaysia for a concert Friday night, but the promoter announced Tuesday that it was postponed by Rihanna's agent.

Prosecutors looked at the files and then asked Andrews for "an additional investigation," DA spokeswoman Jane Robison said.

Andrews said that to keep photos and documents from leaking to the media, he has kept the case file closely guarded and allowed no copies of the material to be made.

Police have refused media requests to hear the 911 call that led to their investigation early Sunday, but Andrews said it mostly recorded the sound of "a screaming woman."