(CNN) -- A possible merger between the two of the largest companies in the concert business has raised protests from singer Bruce Springsteen and prompted a congressman to call for a federal anti-trust investigation. 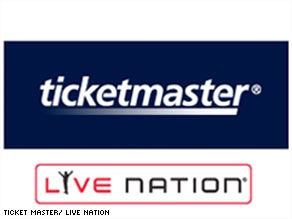 A possible merger between Ticketmaster and Live Nation has drawn interest.

Ticketmaster, which has long dominated ticket sales, is reportedly in merger talks with Live Nation, the world's largest concert promoter, which just recently began selling its own tickets.

Live Nation did not respond to a CNN inquiry, while Ticketmaster's spokesman said "we cannot comment on rumor or speculation."

"Being two public companies, they can't really comment on it right now, but it seems very real to me," said Ray Waddell, Billboard magazine's concert tour reporter. iReport: What do you think of the possible merger?

"You're talking about a hugely powerful entity if these two combine forces," Waddell said. "They're locking up a whole lot of the revenue streams for live music, and that is really the most consistent and profitable part of the music business right now."

Ticketmaster, long a target of fan and artist criticism, drew Springsteen's ire this week when it routed some of his fans trying to buy tickets to his show in New Jersey to a "secondary site" where they were charged far more than face value.

Springsteen, in a message posted on his Web site, accused Ticketmaster of "in effect 'scalping' " the tickets.

New Jersey Congressman Bill Pascrell, who said he was "deluged this week by calls from angry music fans," sent a letter to the Federal Trade Commission chairman asking that the FTC look into Ticketmaster's practices.

After reports that Ticketmaster and Live Nation might merge, Pascrell sent another letter to the House Judiciary Committee calling for a probe.

"There is an incredible potential for abuse when one company controls the primary and secondary market for concert tickets," Pascrell wrote. "That potential will surely be magnified exponentially should one company be able to control every aspect of recording, record sales, licensing, venue ownership and ticket sales."

Springsteen's Web message asked his fans to "make it known to your representatives" if they opposed a merger.

"The one thing that would make the current ticket situation even worse for the fan than it is now would be Ticketmaster and Live Nation coming up with a single system, thereby returning us to a near monopoly situation in music ticketing," said the message, signed by Springsteen and his agent.

Waddell, who has covered the friction between Ticketmaster, artists and fans, said combining the two companies could mean some fan-friendly changes, including rolling all fees into one ticket price to eliminate "sticker shock" when fans look at their credit card bill.

Ticketmaster pioneered online ticket sales, a modern convenience that did away with long lines at the box office.

"What Ticketmaster has done to ticketing, they've really revolutionized it as far as the old days, when you had to camp out for a high-demand show," Waddell said.

Waddell said he doesn't expect ticket prices would "just blow up" after a merger.

"Traditionally, when there's competition taken out of the marketplace it really doesn't do a lot for lowering prices, but both these companies are very sensitive to the market and what the fans can pay," he said.

A combined company, though, would control "everything before, during and after a concert takes place over the course of an entire tour, and that's pretty sizable," he said.

All About Ticketmaster Corporation • Bruce Springsteen