OFF THE BAHAMAS (CNN) -- As the lights come up, Third Day lead singer Mac Powell is a little stumped. He's asked the packed house for requests, but the band can't do the two of the most popular suggestions. 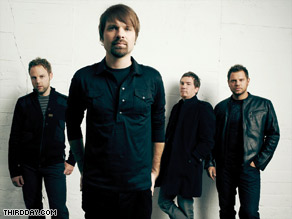 Third Day has earned praise from mainstream publications but is still pigeonholed as "Christian rock."

The first is a song by another popular Christian music group, and the band has never performed it live.

The other suggestion is "Born Again," a ballad on their latest album. They have never played it live, either, and have not practiced it as a group in a long time. The album version also includes vocals by Flyleaf's Lacey Mosley, and she's not here.

After a people shout out a few more suggestions, Powell looks at the band and changes plans. It's karaoke time. One by one, they bring up fans to sing some of the oldies but goodies. The fans love it, even though the vocals are, well, not concert-worthy.

It's moments like this that make Third Day one of the most popular contemporary Christian music bands and the headliner for the 3,000 fans on this Christian-music-themed voyage, the K-Love Friends and Family Cruise.

"It's always fun for the audience and for us," drummer David Carr said. "Every now and then, we are really surprised by what we hear. Both pleasantly -- and not."

The members of Third Day, which has won three Grammy Awards and an American Music Award, are having as much fun on the ship as any of the fans, who are getting a chance to vacation side-by-side with the rockers and 12 other bands. They have brought their families along and -- aside from playing two one-hour gigs -- have been able to be music fans, too.

It's a needed break between tours -- the next one begins March 5 -- but the band is intrigued by the fact that at both shows on the cruise, fans have demanded "Born Again," which is scheduled to be the next single from their 10th studio album, "Revelation."

The band is also enjoying an increase in fame. In June, they became the first Christian band to make the cover of Billboard magazine. " 'Revelation' should appeal to Third Day's core Christian music audience while expanding its fan base in the mainstream rock arena," the magazine said.

The crossover success hasn't materialized, but that hasn't disappointed the Atlanta, Georgia-based band. They plan to continue to focus on Christian-music fans even while their new management company looks at other opportunities.

"Getting to lead people in a worship or just even entertaining them is always a reward," Carr said. "I hope that Third Day continues to explore new territories as a band and still keep our core sense of who we are."

They say they were more focused on giving their fans an album with the Southern rock sound that has made the band famous in Christian music while trying to be a little more creative.

For "Revelation," Third Day worked with mainstream producer Howard Benson (Daughtry, Hoobastank) in Los Angeles, California, rather than a studio in Atlanta.

Anderson says the band pushed itself harder than ever, and even when the record company wanted a finished product, the group pushed back and continued to work and write songs, including the title track.

The result, the band believes, is a collection of songs that is lyrically among their best tunes and musically more than what fans were expecting.

Carr acknowledges that it sounds clichéd for a band member to tout their latest work as their best. Still, he says, this album is as good as any Third Day has produced.

"Having been a band as long as we have [since 1991] and having put out as many albums as we have, it seemed really apparent that this album had to be great," he said. "If you take time out of the equation and just stacked all of our albums together and set them out there and really compared them, I really feel like this is the best one."

It's also important to give a great concert, the band members say. In this economy, Anderson says, it's extremely important to make fans feel like they aren't seeing or hearing the same old thing.

"No one's gonna feel sorry for musicians, but we have to plan budgets. We're very aware of the production," Anderson said. "We're trying to make sure we give people a good value."

On the K-Love cruise, an annual event that has grown exponentially in popularity, the band gave fans a chance to see their new music DVD, a 75-minute production stuffed with concert footage and backstage scenes.

There was a little hitch: It wasn't the final edit. The band thought it had the most recent version but brought along an earlier copy and had to reburn it to get it to play on the ship's video board. Still, the Lido Deck was packed with fans eager to get a closer look at the life of the band.

Third Day also added scenes with their families to the DVD.

"Since our fans are so cool and respectful, we'll give them that," Anderson said.

Anderson says the band is "antsy" to produce new music but wants to be careful about what songs they include in their 75-minute concerts. He thinks it's important to listen to the audience suggestions during the request periods and what the karaoke singers want to sing, as well as talking to cruisers about what tunes inspire them.

He knows there are still unreleased singles from "Revelation" that fans coming to the arena shows are expecting to hear, and it's now obvious that "Born Again" is one of them. There are other ballads he expects to click with radio audiences.

"I think we have a lot of life left in this record," he said. "We came out [with singles that were] rocking. It's when there start to be 'heart moments' that Christian records really take off."

All About Christian Rock