LOS ANGELES, California (CNN) -- After a long apprenticeship, it's been an astonishingly fast rise for R&B singer Jazmine Sullivan. 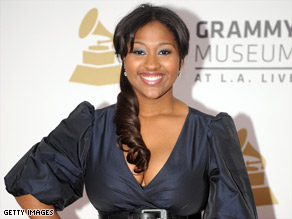 Jazmine Sullivan is up for five Grammys next month, including best new artist.

Before she was in her teens, Sullivan sang on "It's Showtime at the Apollo." At 13, she met Stevie Wonder. Soon she was performing regularly at the jam sessions called Black Lily in her hometown of Philadelphia, Pennsylvania.

She went to that city's performing arts high school and was signed to a contract by Jive Records, where she was paired with producers such as Timbaland and Cool & Dre.

It didn't work out -- then. But soon, Sullivan signed with Clive Davis' J Records, and suddenly she was everywhere. Her debut single, "Need U Bad," hit No. 1 on Billboard's R&B/Hip-Hop chart, and her album "Fearless" hit the Top 10 on Billboard's album chart.

Now she's up for five Grammys on February 8, including best R&B performance (for "Bust Your Windows") and best new artist.

CNN's KJ Matthews talked with Sullivan about her inspirations, who she's bringing to the Grammys and the mysterious person behind "Bust Your Windows." The following is an edited version of that interview.

CNN: How would you describe your sound?

Jazmine Sullivan: I can't really describe it; that's the whole thing. Once you hear the CD, you'll hear that one sound doesn't sound like the next. You know, I've been influenced by so many different styles and different genres of music that I felt like that should be represented on my first album, so when you get it, you get a taste of gospel, jazz, R&B, hip-hop, reggae, pop ... everything is on there, there's something for everybody to enjoy. I didn't want to exclude anybody from the album.

CNN: Let me ask you this: When you saw or heard the other nominees in the best new artist category who happen to be a little bit more well-known, was it intimidating? I mean, you got the Jonas Brothers, Katy Perry, Adele ...

Sullivan: Yeah, the Jonas Brothers, specifically. I didn't even know they were new artists because they are so huge, so, you know, so after, when my name was called after theirs, I thought, "Wow, they're new artists, too?" I got a little scared, I tell you that.

But I'm just so honored to be mentioned to be in the same categories with such wonderful artists, so I'm looking forward to February and the Grammys and just being in that atmosphere.

CNN: I was looking at your background, and I didn't know that you're a protegee of Missy Elliott. I was thinking to myself, you would think that you would do rap, but you're this big voice, this soulful voice. You might not equate that with Missy.

Sullivan: Yeah, and a lot of people don't know that Missy Elliott ... grew up in the church, and she's really into vocalists. When I met her, was I was about 13 or 14, [and] she was ecstatic about me. When nobody else was there to support me, Missy was there, so she's a good friend of mine, and I'm happy to have her by my side. She's definitely taught me a lot of things.

CNN: So everybody wants to know, the guy behind "Bust Your Windows" -- is there one?

Sullivan: We won't talk about that on camera -- that's an off-camera conversation -- but it's definitely a song that relates to a lot of women especially. You know, even if they really haven't busted windows out of anybody's car, they have wanted to. A lot of women have been through that, so I'm glad that my music is touching those people

CNN: "Need U Bad" is rising as well. What's the thought process behind that one?

Sullivan: "Need U Bad" ... a lot of men actually pointed out to me that women don't come out and admit that they made mistakes and say that they actually need the male, so I think that was kind of cool. I haven't thought of it like that when I was writing it. So, you know, it's a song for the fellas, saying that we appreciate them and we need you as much as you need us.

But on the flip side, I do a song like "Bust Your Windows," so on the album you have a lot of different perceptions and everything.

Sullivan: Well, I've been in this industry for a very long time. I started out when I was 12; I got signed when I was 16, so it wasn't an overnight success story at all. I put a lot of hard work into it, and this is just a byproduct of all of that.

CNN: It's great that you write your own music too, because a lot of people don't do that. You have a lot more creative control.

Sullivan: Most definitely, and I've dealt with not having that control when I was younger and I was signed. I wasn't writing at all, and so I've been through all of that. So now to be in a position where I write my music, and I have that control -- it feels so much better.

CNN: All right, the big question: Grammy night. What are you wearing? Who are you bringing? What are you going to be doing?

Sullivan: I'm bringing my mother. She's been my rock and my support ever since I was a baby. She was my first huge fan, that what she is.

I don't know what I'm wearing. I'm trying not to think about that. I want to perform. Hopefully I can get on stage and I can show everybody who I am and what I'm about. But I haven't thought about the dress or the shoes or the hair or anything about that.

CNN: You're just trying to enjoy the moment.

All About Grammy Awards • Missy Elliott