(CNN) -- Movie director John Landis is suing Michael Jackson, accusing the reclusive entertainer of fraud in his handling of profits from the iconic "Thriller" video the two made together more than 25 years ago. 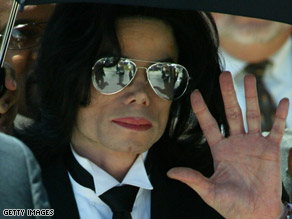 "King of Pop" Michael Jackson, seen in 2005, made the "Thriller" video with John Landis more than 25 years ago.

Landis claimed his 1983 contract with Jackson gave him 50 percent of net profits from the 14-minute video and the documentary about the making of it, both works that he directed and co-wrote with Jackson, court documents say.

Jackson "wrongfully refused to pay or account for such profits," the suit, filed against the singer and Optimum Productions, says. The suit characterizes Optimum as "a defunct corporation" Jackson has used as an alter ego.

The suit accuses Jackson of "concealing the extent of net profits" by not giving an annual accounting for at least the past four years, and maintains that Jackson is "guilty of fraudulent, malicious and oppressive conduct."

Jackson's lawyers have not responded to the suit, which was filed on January 21.

The video was based on Jackson's 1982 album by the same name, one of the top-selling of all time.

Landis, best known as director of "Animal House" and "An American Werewolf in London," made the song into a short horror movie, complete with Vincent Price adding narration.

Word of the suit comes just after an announcement that Jackson has signed a deal to take the dancing zombie story to the Broadway stage.

The Nederlander Organization, a Broadway production company, announced Tuesday that it had signed a contract with Jackson to produce "Thriller" on stage. The show, which Jackson is to be involved with, also is to include music from other Jackson albums, the company said.

The court has set May 11 as the date for lawyers to hold a conference with a judge concerning the lawsuit.

All About Michael Jackson • Broadway Shows