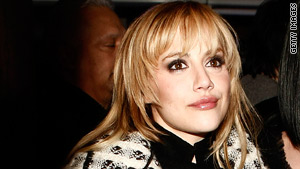 Brittany Murphy gained acclaim for her movie roles, including "Clueless" and *8 Mile."

Los Angeles, California (CNN) -- Friends and family of actress Brittany Murphy held a private funeral Thursday for the 32-year-old who died unexpectedly of what authorities said were natural causes.

The service at the Hollywood Hills Forest Lawn Cemetery featured Christian and Jewish clergy. It included the hymn "Amazing Grace" and a reading from "The Little Prince," one of her favorite books.

"Today a wife, a daughter, a niece, a cousin, a family member and dear friend to thousands was laid to rest," the family said in a statement.

"Brittany was an incredibly loving and passionate person ... there are no words that can truly express the devastation felt by Brittany's husband, mother, and everyone who attended the intimate service."

Murphy was pronounced dead Sunday morning at Cedars-Sinai Medical Center in Los Angeles. Authorities have said she appeared to have died of natural causes. No sign of foul play or trauma was found.

Murphy was best-known for her work in a string of comedies earlier this decade, including playing lead roles in "Uptown Girls" alongside fellow Georgia native Dakota Fanning, and "Little Black Book" with Holly Hunter and Kathy Bates.

She is survived by her husband, British screenwriter Simon Monjack, who also spoke at the service.

The family may have a larger public memorial early next year, but nothing is confirmed yet, spokesman Alex Ben Block said.