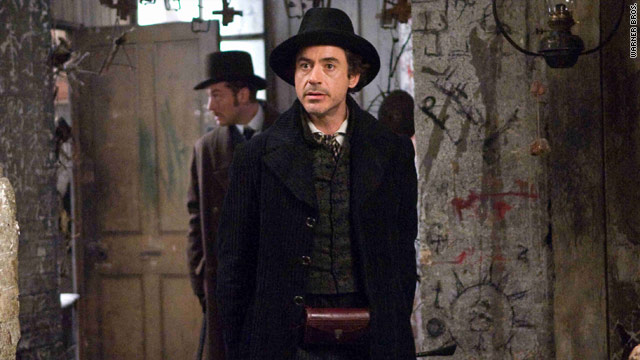 Beginning with a hansom cab slamming through the cobbled streets of London, the movie sets off at a breakneck pace. Holmes' first piece of deductive reasoning is to calculate the likely course of hand-to-hand combat with a heavyset goon -- planning a combination of punches as if he were strategizing a game of chess. This proves to be a bit of a party piece, and it comes with the dubious bonus of an instant replay for every blow.

The books make mention of Holmes' prowess in the ring, but I don't recall any previous screen Sherlock stripping off for a bare-knuckle bout. Still, "Iron Man" Downey is in great shape, even after the dejected detective succumbs to squalid self-pity after putting Lord Blackwood (Mark Strong) behind bars for a series of Jack the Ripper-like murders and failing to find another case worthy of his intellect.

To add to Holmes' enervation, his Baker Street companion, the good doctor, has plans to be wed.

It's only after Blackwood escapes -- not from prison, but from the grave -- that Holmes perks up. The game's afoot and Watson, who signed the death warrant after His Lordship's execution, is back at Holmes' side.

Downey doesn't exactly look the part; he's probably a foot shorter than the Holmes depicted in the famous illustrations in Strand magazine. But he's got that cutting cleverness -- only a whisker from pure misanthropy -- that's the character's most essential attribute. And if we're quick to link Holmes' self-destructive impulses to the star's own checkered history, don't imagine the filmmakers haven't thought of that too.

Affecting an honorable upper-crust English accent, Downey angles for flip and steers on the right side of parody. He's needier than his most celebrated predecessors in the part, Jeremy Brett and Basil Rathbone, but also more physical, less cerebral.

I like to imagine he's doffing his cap in the direction of Robert Stephens, who did something similar in Billy Wilder's underrated (and far more sophisticated) 1970 film "The Private Life of Sherlock Holmes."

Often more interesting in supporting parts, Jude Law makes for an agreeable comic foil, and Kelly Reilly makes the most of a fleeting role as Watson's feisty fiancée, Mary. Rachel McAdams is fine as Irene Adler, Holmes' favorite femme fatale, but the screenwriters (four of them) don't seem to know quite what to make of her -- just that the movie will play better if she's around.

If the mystery boils down to so much supernatural skullduggery, at least it chimes with Conan Doyle's own interest in spiritualism, and anyway, you could say the same about "The Hound of the Baskervilles."

Ritchie and company are predictably impatient with demonstrations of Holmes' superior sleuthing -- and perhaps forensics are best left to "CSI" these days -- but if it's a travesty of Conan Doyle on one level, it's certainly an affectionate one, and smartly attuned to today's taste for slam-bang action and adventure.

Best of all is the production design (most of it digitally created, presumably). There's a sterling sense of London as the boiler room of the Industrial Revolution. Tower Bridge is still under construction. A splendidly exorbitant fight sequence in a boatyard is like "Titanic" on fast-forward, and we can clearly see the Thames is the city's main thoroughfare. The "Old Smoke" probably hasn't looked this exciting for a century or more.

It's a movie of big, bold strokes and somewhat crass commercial calculation, but if Ritchie succeeds in resurrecting this long-standing 19th-century icon for the 21st century (and the ending practically pleads for a sequel), I suspect most fans will want to wish him many happy returns. It's hard to complain about having Holmes back on the case.