Review: 'Avatar' delivers on the hype 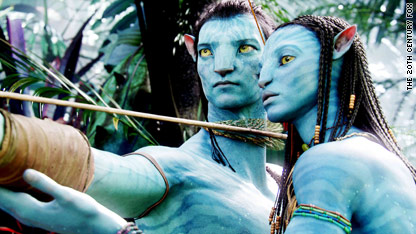 For maybe the third time in his career, the immodest Canadian has made "the most expensive movie ever," confident that showmanship never goes out of style.

Already it feels like an epochal movie, a landmark fantasy film on par with "2001: A Space Odyssey," "Star Wars" and "The Lord of the Rings."

Like those (very different) movies, "Avatar" stretches the bounds of the cinematic imagination. It shows us something we've never seen before: an entire alien world, a new and complex ecosystem rendered in three dimensions with dazzling fluidity and detail. Blog: A geek praises "Avatar"

Welcome to Pandora, a distant planet and one of the most valuable outposts in the solar system. Here, earthlings mine a rare mineral and try to maintain equitable relations with the indigenous people. The Na'vi are 10 feet tall, blue-skinned and increasingly pissed as the humans encroach on their sacred lands.

This being the middle of the 22nd century, Earth's corporate emissaries don't want to come in and take what they want by force (not unless they have to).

Instead they try to win the natives' trust by setting up schools, teaching them English and infiltrating their number with organic avatars, modeled on Na'vi DNA but controlled with a human consciousness -- which is where Jake Sully (Australian actor Sam Worthington) comes in. He's a Marine and just naïve or innocent enough to score a free pass into the most suspicious of the local tribes.

If Jake -- or rather, his avatar -- can talk the Na'vi into leaving their jungle home of their own free will, then everyone will be happy. If not, the military will put his intelligence to more pragmatic use.

Put that way, the movie sounds like a video game (lo and behold, that's exactly how the "Avatar" video game plays out).

Gamers will also feel very much at home with the film's stereoscopic visual texture, a kind of synthetic naturalism, seamlessly folding live action into computer animation and vice versa.

There are mountains that float, flying reptiles, six-legged horses and strange, ethereal objects that look like jellyfish.

We're reminded that the "Titanic" director is an avid deep-sea diver: Pandora's rainforest resembles a spectacular coral reef. At night, the plants have a phosphorescent glow. When the Na'vi tread through it, the ground lights up beneath their feet (I kept waiting for someone to break into a chorus of "Billie Jean").

It's this vivid blurring of the real and the imaginary, the material world and the spiritual, that's at the heart of Cameron's movie.

In his peculiar vision of utopia, technology and ecology fuse. On Pandora, electrical currents flow through the root systems of the trees.

When the Na'vi ride a winged dragon, the first thing they do is plug into its circuitry. It's a techno-geek's pantheism, a new gloss on the counterculture slogan "Turn on, tune in and drop out."

Jake Sully's out of body experience is simply another extension of this interconnectivity, as if role-playing games might one day lead to a profound philosophical empathy, a higher human consciousness.

Subtlety is not high on Cameron's agenda, and however many Academy Awards it may pick up, best screenplay seems like a long shot.

It's basically "Dances with Wolves" in outer space; the tale of a U.S. soldier "going native" (Cameron even casts Native American actor Wes Studi as a Na'vi chief).

Dramatically, it's simplistic. But if you look around the world at the devastating impact of oil companies on indigenous populations, you have to concede that Cameron has a point. A double bill with Joe Berlinger's documentary "Crude" might be in order.

All of which is a bit rich coming from such a big, big budget blockbuster, a movie that seems destined to inflate Hollywood costs still further at a time when mid-budget pictures are being squeezed out.

I can't say I was moved, and it doesn't match "Terminator 2" for excitement, but for size, spectacle and sensory overload, "Avatar" delivers on the hype. For better or for worse, it's a must-see.