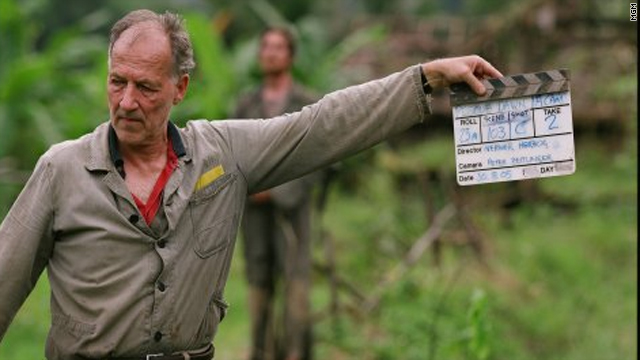 London, England (CNN) -- Controversial Bavarian film director Werner Herzog advises young filmmakers they don't need to go to film school, but rather explore the world on foot, and not let fear of rejection keep them from their dreams.

Speaking at the Thessaloniki Film Festival, Herzog said his early career was chock-full of rejection.

"For me, the first 10 years of making films, I had hardly any success at all," he told a master class at Thessaloniki in Greece, one of the world's oldest film festivals.

"I remember 'Signs of Life,' which I made here, my first feature film," the director, producer, screenwriter, actor and opera director told the class. He said that despite the fact the film won an award at the Berlin Film Festival, "nobody" went to see it, "not one person."

You have to go out and do it. That's one of the basic things you have to know about the profession.
--German director, Werner Herzog

"You don't need to go to film school," he said. "You can learn the technical things in less than a week. All the rest you can learn by traveling on foot."

Herzog said good film making was all about experiencing the highs -- and lows -- of life.

"You have to have fundamental experiences in life, like solitude," the German director told the class. "You have to experience it to know what it means."

Herzog said that, with small, modern film cameras, a feature film can be made for "$15,000 dollars" nowadays.

Besides using movie stars, Herzog often uses local people where he is filming as actors. He is reported to be the only feature-film director to have made a film on every continent.

"Everyone is complaining, 'nobody wants to have my films.' So what? There is no culture of complaint I would accept."

"You have to go out and do it," he told the master class. "That's one of the basic things you have to know about the profession."

Herzog is known as the only director who was able to work with the late, eccentric actor, Klaus Kinski, father of actress Nastassja Kinski. He was once quoted as saying, "Every gray hair on my head, I call Kinski."

On the set of "Aquirre: The Wrath of God," in 1972, Herzog admitted he threatened to shoot Kinski if the actor made good on his threat to walk off the set.

"I told him it was impermissible for him to walk away," Herzog said. "I explained to him calmly that he would not survive if he tried. I had a rifle ... and I told him I would shoot him. He screamed for the police. The nearest police station was 40 kilometers away."

Herzog warned aspiring filmmakers the path they've chosen will be a "complicated life ... a life of humiliations and defeats, and you will eventually also accomplish something and you will give significance, meaning to your life, if you do it the right way."

In the early 1960s, Herzog worked night-shifts in a steel factory as a welder to get the money for his first films.

"Rejection is not something you should be afraid of," Herzog advises filmmakers just starting out. "It happens to all of us, in particular when you are beginning. You have to have the courage to move on anyway."

"Ultimately, if you have a very good story, [then] finances, money will follow you ... in the streets with its tail between its legs," Herzog said.

He said young filmmakers should not expect appreciation.

"You have to have the nerve to face very, very harsh criticism and the criticism will come painfully enough in the media," he said.

In an interview with CNN at the film festival, Herzog said he is planning on giving all his films away to a non-profit foundation, "which ultimately means I do not own them anymore."

"So they will be owned by a foundation and they cannot be taken apart anymore," he said.

Herzog was recently selected to be the head of the jury at the upcoming Berlin Film Festival.

"It's good I'm returning with a real function back to Germany," said Herzog, who lives in Los Angeles. "I have not been at the festivals and I have not been to any official events."

"It's a good time to return, with a real duty."