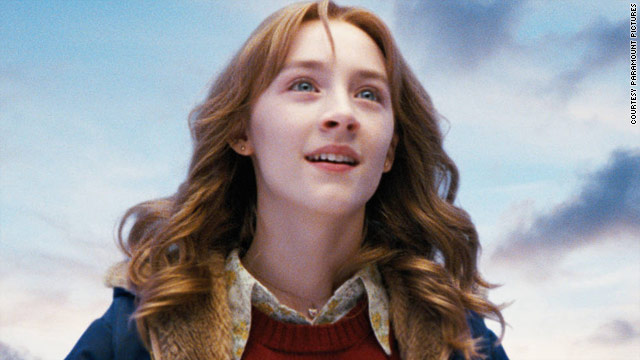 (Entertainment Weekly) -- A dead 14-year-old girl named Susie Salmon (Saoirse Ronan), murdered on her way home from school in 1973, tells her story from heaven in "The Lovely Bones."

In doing so, Susie follows the narrative path set for her in the striking 2002 novel by Alice Sebold on which this much-awaited adaptation by Peter Jackson is based. But as directed by the lord of "The Lord of the Rings" from a screenplay by Jackson, Fran Walsh, and Philippa Boyens, his bleached "Bones" bears little resemblance to the book in either tone or complexity.

Readers will be frustrated; newcomers to the story may wonder why what is now essentially a serial-killer thriller includes so many scenes of a heaven that looks like a gumdrop-colored hobbit shire, a magical place of fanciful special effects.

In Jackson's simplified, sweetened, and CGI-besotted telling, "The Lovely Bones" is a sad-but-hopeful, dramatic-but-gentle fairy tale intentionally made less upsetting for teens. (There's no indication that Susie gets raped, as she does in the novel, and her murder occurs off screen.) "Atonement's" terrific Ronan, with her astonishing glacier-blue eyes, watches from a scenic afterlife as her father (Mark Wahlberg), mother (Rachel Weisz), younger siblings, and selected friends simultaneously heal from their loss and search for her killer.

As for the killer, he's in plain sight from the beginning: a creepy neighbor (Stanley Tucci) with the hopeless comb-over and furtive mustache of an easy-to-spot perv. Tucci is jolting in the role, honestly unsettling as he maintains an exterior of mildness that masks a grotesque interior.

Electrifying danger accompanies his every scene. But this in itself becomes a problem, as that same energy leaves the screen when he does. Jackson reduces his "Lovely Bones", in the end, to the dramatic contrast between the menace of a hateful killer (will he be caught?) and the grief of a loving father (can he avenge his daughter's death?).

Sebold's "Lovely Bones", on the other hand, is fleshed out with the perilous, irresistible power of sex the author acknowledges a real world of extramarital sex and sex between young lovers in addition to the heinous rape from which moviegoers are shielded.

The filmmaker handled the sexual power of girls beautifully in 1994's "Heavenly Creatures". But here he shies from the challenge, shortchanging a story that isn't only about the lightness of souls in heaven but also about the urges of bodies on earth. Jackson forfeits depth for safe, surface loveliness.