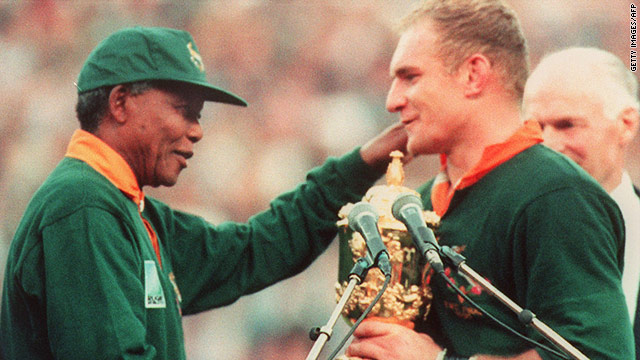 (CNN) -- Francois Pienaar was the "big blonde son of apartheid," a white South African who grew up dreaming of glory on the rugby field.

He became a star and the captain of South Africa's national rugby team -- a sport hated by many black South Africans as the game of their oppressors.

But on June 12, 1994, Nelson Mandela summoned Pienaar to his office to ask him to play a more dramatic role.

As Mandela served Pienaar coffee with milk, he gave the star rugby player snippets of his audacious plan. That plan would electrify South Africa, stretch Pienaar to his physical and emotional limits, and cement Mandela's reputation as a transcendent leader.

"I left that first meeting with the feeling that we were in good hands in South Africa," Pienaar said. "I felt safe with him."

What happened after Pienaar's meeting with Mandela was so magical that it seemed to unfold like a movie. Now, 15 years later, it is. "Invictus," a Clint Eastwood-directed film on Mandela, opens nationally this Friday. Morgan Freeman stars as Mandela and Matt Damon plays Pienaar.

The film (made by Warner Bros. Pictures, which, like CNN, is a unit of Time Warner) depicts the South African rugby team's surprising run at the 1995 Rugby World Cup. It is based on the 2008 book, "Playing the Enemy: Nelson Mandela and the Game That Made a Nation."

John Carlin, author of "Playing the Enemy," said Mandela used the World Cup final to win the allegiance of a group of people who had largely applauded his 27-year imprisonment, and threatened to push South Africa into a civil war.

"It was on that day [the day of the Rugby World Cup final] that white South Africa finally, categorically accepted him as their rightful president, the president of all South Africans," Carlin said.

The 'son of apartheid' comes of age

The film also looks at the evolution of Pienaar, and, by extension, Mandela's longtime enemy, the Afrikaners.

Afrikaners are the descendents of the Dutch pioneers that settled South Africa in the 17th century. They became the primary enforcers of apartheid, a brutal system of racial segregation.

In his book, Carlin described Pienaar as the "big blonde son of apartheid," a 6-foot-4, 240-pound man who grew up worshipping the violent sport of rugby, an obsession for many Afrikaners. Rugby is known as "the opium of the Afrikaner," says Carlin.

Like many Afrikaners, Pienaar said he didn't question the morality of apartheid growing up, nor did he think much of Mandela, who was considered a terrorist by many white South Africans.

"Sadly, I couldn't say that I did," he said. "I didn't oppose apartheid. Politics wasn't on my radar screen. I saw the divisions in life and in school, but I just didn't ask why."

Mandela did ask about those divisions in South Africa and it cost him much of his life. Today, most people know Mandela as the former anti-apartheid activist with the grandfatherly smile, silver hair and the dignified bearing.

But the younger Mandela was like a "young, brash Muhammad Ali" in his youth who enraged, and spooked white South Africans, Carlin writes in his book.

I can't tell you how nervous I was. I didn't know what he was going to ask me.
--Francois Pienaar
RELATED TOPICS

Mandela publicly tore up the pass that black South Africans were forced to carry for travel and once boldly predicted that he would someday be South Africa's first black president, says Carlin. He sometimes wore camouflage gear in public and advocated armed resistance when years of nonviolent resistance failed.

He was also a showman. He liked to show off his muscled physique honed by boxing and dressed like a dandy as a young man in the 1940s, Carlin notes.

"He was the only black man who had his suits cut by the same tailor as South Africa's richest man, the gold and diamond magnate Harry Oppenheimer," Carlin wrote in "Playing the Game."

Mandela's dashing public persona came to an end in 1964, just as his legend began to grow. He was arrested and sentenced to life in prison for crimes against the state of South Africa. He was sent to Robben Island, a desolate rock off the coast of Cape Town, South Africa. He would stay imprisoned for 27 years.

Robben Island was designed to break prisoner's will. It seemed to make Mandela's will even stronger. His cell was smaller than the average white South African's bathroom, Carlin noted. He slept on a straw mat with three thin blankets, and bathed with buckets of frigid Atlantic seawater.

Pienaar said he first visited Mandela's Robben Island jail cell just days before the 1995 World Cup final. When that scene was shown during an "Invictus" premiere, Pienaar said that he lost it.

"I just bawled," Pienaar said. "That's the part of the movie that got to me the most. I just thought to myself, how could we have done this to this man for 27 years?"

Mandela, however, was preoccupied with other things during his captivity. He used that time to learn how to "play the enemy," Carlin said.

Mandela had faith he would be released one day and become the leader of a new South Africa. But first he had to understand, and enlist the support of Afrikaner leaders, Carlin said.

"He worked at it in prison, the great laboratory for the political offensive he would launch the day he left prison," Carlin said. "He got to know his enemy -- the Afrikaner -- through the jailers, whose language he learnt; whose history he read; whose foibles and vanities and strengths he learned to understand."

Near the end of his prison term, guards treated Mandela like a head of state. Some became his personal friends. One guard even sneaked his baby boy into prison for Mandela to see, Carlin said.

Mandela forms a partnership with Pienaar

Mandela was released from prison on February 11, 1990 as South Africa prepared to move from apartheid to majority rule. He won the presidency in 1994 in South Africa's first democratic election.

Yet Mandela inherited a country that teetered on the edge of a civil war. Heavily armed right-wing militants threatened to revolt. People worried that the South African military would mutiny and many white South Africans were afraid to lose their jobs, farms, anthem, flag and even their lives.

Mandela needed to do something dramatic to unite the country. That's when, Carlin says, Mandela thought of Pienaar.

By 1994, Pienaar was captain of the Springboks, South Africa's national rugby team. Mandela thought rugby could help heal the nation's racial divisions. But he needed to know if he could count on Pienaar's support. He had to take the measure of the man. He set up a meeting.

Of course, Pienaar had no idea about Mandela's plans. He wasn't a politician. He was the captain of the rugby team. After Mandela asked to meet him, Pienaar said he was so tense that his palms became sweaty.

Over the next two years, Pienaar learned what to say. In fact, he delivered an eloquent tribute to Mandela during an impromptu exchange after the Rugby World Cup final.

But all of that, of course, is captured in "Invictus." The film shows how a rugby match changed South Africa, and turned Pienaar into a symbol of racial reconciliation, Carlin, the author, said.

"He is an iconic figure," Carlin said of Pienaar. "He is a central player in the most joyful political drama the country ever lived. And Mandela adores him. Mandela told me he'd like to see Francois emerge as a serious political leader, seeing him as someone that could continue the work he began of racial unification."

Mandela is also the father of a nation. Carlin said Mandela "was to South Africa what George Washington has been to the United States -- the indispensable man."

It happened five minutes before the 1995 World Cup final. Mandela walked out onto the stadium field to shake the hands of players. He was wearing the green cap and uniform of the South African national team, with Pienaar's number stenciled on his jersey.

When the crowd noticed Mandela, Carlin, the author, said they seemed "to go dead still." Then they slowly began chanting, and the chant picked up and spread through the stadium as Mandela waved his rugby cap and broke into a huge smile.

Pienaar was in the dressing room at the time. He didn't see Mandela, but he heard the crowd of mostly white South Africans as their voices rumbled through the stadium.

They had called him a terrorist, a communist and an enemy of the state. Now they chanted something else as Mandela faced the crowd: