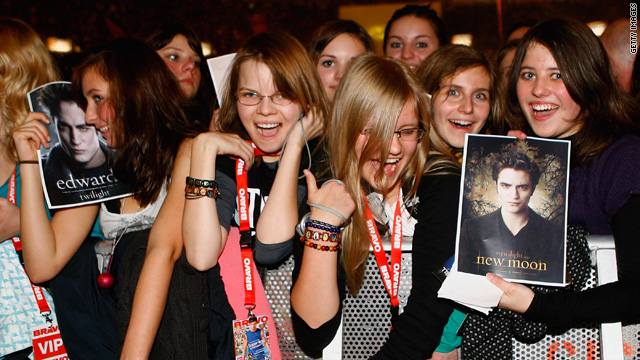 Despite what Hollywood may think, women do want to go to female-centric movies.
STORY HIGHLIGHTS
RELATED TOPICS

(CNN) -- There's an old Hollywood tale, and it goes like this: Open a female-led movie around Valentine's Day. Watch women go in droves and drive up box office numbers.

Then let Hollywood executives call it a fluke, since everyone knows that women don't go to movies.

Over the past few weeks, that tale has been told with a twist.

Two female-led movies have earned astronomically high box office numbers -- like "third best opening weekend" high -- on fall weekends typically dominated by blockbuster movies aimed at men. "New Moon," the second film in the "Twilight" vampire series, has grossed more than $230 million since its opening, while "The Blind Side," about a white family that takes in a homeless African-American boy, is already past the $100 million mark.

For both "Blind Side" and "New Moon," women have made up more than half the audience. And by the time these films complete their runs, they could gross nearly $500 million combined, said Gitesh Pandya, the editor of BoxOfficeGuru.com, because of a largely female audience packing theaters.

"There's no difference in movie-going by gender; women are just as likely to go to the movies as men," says Martha Lauzen, executive director of the Center for the Study of Women in Television and Film at San Diego State University.

If you give women movies reflecting their experience and interests, Lauzen says, they will go -- even on opening weekend. And yet the movie industry always seems surprised to find out that women go to the movies.

Just three years ago, "The Devil Wears Prada," starring Meryl Streep and Anne Hathaway, grossed $40 million at domestic box offices in the first five days of its opening. The total so surprised Fox's president of distribution that he remarked he "never thought it would be this big," since he'd never seen a "predominately female movie open quite that large."

Sarah Jessica Parker and her Manolo Blahniks grossed $57 million for "Sex and the City" during its opening weekend in 2008. The film made $152 million total at the box office. This was followed by the success of Streep's "Mamma Mia" and "Julie and Julia," and the Katherine Heigl-led romantic comedies like "27 Dresses" and "The Ugly Truth."

"Women are a dramatically underserved segment of the moviegoing population, and if the industry would produce films that are not, by the way, just about shoes and clothes, but really had multidimensional female characters doing interesting things, women will go to see these movies in droves," Lauzen says.

So, now that the truth is out, women in Hollywood are going to be very, very busy in the next few years right?

"The performances of these films have been nothing short of extraordinary," Pandya said. "Having said that, studios are run by stubborn men, so it'll take more than this to make substantial changes."

Lauzen agreed, pointing out that Hollywood isn't the kind of town that embraces change readily.

"People need to understand the magnitude of this problem, and how entrenched it is," she said. "That's why I'm saying something substantial and sustained would have to happen to change this." She believes that, until more women are making movies, there won't be many female-centric movies to see.

But there is one woman in Hollywood who has hope: Women in Film's president and independent film producer Jane Fleming, who co-founded Shot in the Dark Entertainment.

"I think the last three years have been extraordinary," Fleming said. "A large slate of films have done really well, and it becomes less of an oddity and more of a norm," Fleming said. "Anytime something becomes less of a fluke, the more firepower people have to say, 'Hey, these 15 to 20 movies have all done well over the past three years,' and the case for the 'no' goes away."

Fleming is hopeful that the increase in diversity on screen will carry over behind the scenes, too.

"The trend is starting to change. We're seeing evidence that more than 13-35-year-old men go to movies," she said. "It bodes well as we go to have a diversity of voice in the films that are coming out, and hopefully that will translate to more women making them."