Michael Moore to Obama: No more troops in Afghanistan 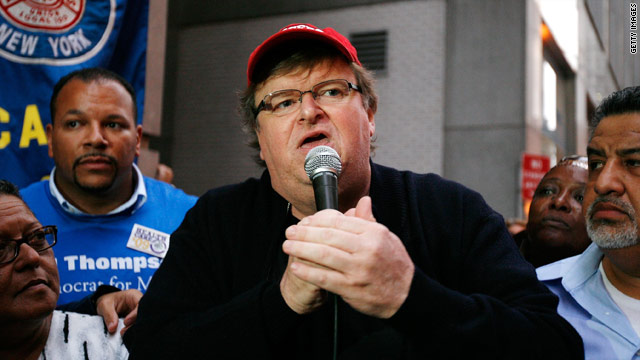 "When we elected you we didn't expect miracles. We didn't even expect much change. But we expected some. We thought you would stop the madness. Stop the killing. Stop the insane idea that men with guns can reorganize a nation that doesn't even function as a nation and never, ever has," Moore wrote in the letter posted on his official Web site, michaelmoore.com.

Obama is expected to formally unveil his military strategy in Afghanistan at the U.S. Military Academy at West Point, New York, on Tuesday night.

Obama is expected to announce that he will be sending more than 30,000 troops into the region. The president is also expected to lay out a time frame for winding down American involvement in Afghanistan.

In his letter, Moore warned the president that increasing troop levels could cause disillusionment among the young voters who helped put him in office. Moore encouraged readers to call the White House or e-mail the president to express their dissatisfaction.

"Do you really want to be the new 'war president'? If you go to West Point tomorrow night and announce that you are increasing, rather than withdrawing, the troops in Afghanistan, you are the new war president," Moore penned to the president. "With just one speech tomorrow night you will turn a multitude of young people who were the backbone of your campaign into disillusioned cynics. You will teach them what they've always heard is true -- that all politicians are alike."

Moore is currently traveling through Asia to promote his latest movie, "Capitalism: A Love Story," which has seen feeble returns at U.S. box offices, pulling just over $14 million in nine weeks. By comparison, Moore's "Fahrenheit 9/11" grossed $119 million at the U.S. box office.

In addition to writing the letter, Moore said in Japan this week that he had sent Obama a message from his father, a World War II veteran.

"I passed on to him a personal request from my father and his Japanese friend: 'Mr. Obama, you do not know war. We both know war and want it no more'," Moore said in Tokyo.