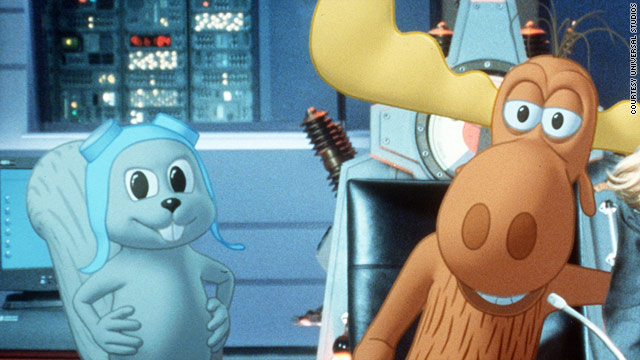 His daughter, Tiffany Ward, continues her father's legacy as executive producer of the feature films "The Adventures of Rocky & Bullwinkle, "Dudley Do-Right" and "George of the Jungle," and Cartoon Network's (sister channel to CNN) new "George of the Jungle" animated TV series.

"My dad was a true eccentric," Ward said. "His studio was a wonderland for me. It had a soda fountain, ice cream sundaes, a snow cone machine, a popcorn maker and candy bars everywhere."

Tiffany Ward grew up in Berkeley, California, and didn't move to Hollywood until 1959 at age 13 when her dad set up his television studio.

"Dad was always doing fun things," Ward said, recalling a 1961 Sunset Boulevard block party her father hosted to promote "The Bullwinkle Show." The show was originally named "Rocky and his Friends," but was renamed "The Bullwinkle Show" when the program went from ABC to NBC.

Ward was a one-man public relations machine, churning out first-rate promos in the days before PR companies were entrenched in the system.

In another promotional stunt, Jay Ward tried to buy an island between Minnesota and Canada that he named Moosylvania (he leased it instead). In efforts to have Moosylvania made into the 51st state, Ward traveled cross-country by bus, collecting signatures along the way.

When Ward reached the White House gates, he asked to speak to President John F. Kennedy about statehood for Moosylvania, but guards brusquely turned him away. As it turned out, Kennedy was dealing with the Cuban Missile Crisis on that exact day.

Jay Ward did not have a favorite character, his daughter said, because to him it would have been like selecting a favorite child (Incidentally, Ward had three kids). Of all the characters he created, Ward didn't have a favorite per se, but Tiffany Ward does recall his partiality to Dudley Do-Right, the slow but well-meaning Canadian Mountie.

When asked about "Rocky & Bullwinkle's" everlasting appeal, Ward said she thinks it struck such a chord and remains popular today because her father never wrote for children, he wrote for adults. Jay Ward wanted kids to enjoy the pictures while grown-ups laughed at the quick wit and inside jokes.

In one episode, Rocky and Bullwinkle are propelled to the moon when their oven explodes while the pair are following Bullwinkle's grandmother's recipe for mooseberry fudge cake. Fun for kids for obvious reasons, but adults certainly got a chuckle when the moose griped about still having to make payments on the oven.

Bullwinkle also mentions having graduated from MIT -- the Moose Institute of Toe-Dancing, that is. Furthermore, Mr. Peabody the dog, a Harvard graduate, lives in a Manhattan penthouse, practices yoga and has an adopted son, because as he puts it: "Every dog should have a boy." Peabody chooses an orphan because he "always roots for the underboy." It's these little jokes that set the show apart from typical children's programming of its time.

Today those jokes may not have us rolling on the floor laughing (or ROTFL, as the kids say), but they were the 1960s equivalent of Stewie's reaction to being rejected by "American Idol" on "Family Guy."

The 50th anniversary of "Rocky and Bullwinkle" also means that spy duo Boris & Natasha, Mr. Peabody & Sherman and the Fractured Fairytales are celebrating birthdays as well.

Fractured Fairytales offered a skewed take on traditional children's stories. The moral was the same, but modern, funny dialogue was tossed in with slapstick humor. Rapunzel, for example, visits a barber shop and laments about having "no future."

"Incredible writing is the reason the show resonates to this day," Ward said.

Today, cartoons are more popular than ever. There are cable networks devoted to animation, and it is commonplace for cartoons to be written specifically for adults. Fox's Sunday night animation domination block featuring "The Simpsons" and "Family Guy" comes to mind. "Rocky & Bullwinkle" was among the first animated series to hit prime time television.

Matt Groening even paid special homage to Jay Ward when he created "The Simpsons" by giving Bart, Homer and Grandpa Simpson the middle initial "J," as in Rocky's full name: Rocket J. Squirrel.

Tiffany Ward said she is thrilled there's such a wide array of animation available to viewers today, especially since in her father's era it was difficult to even get airtime for the genre. New projects are always coming the duo's way, and an animated Dreamworks feature film is in development.