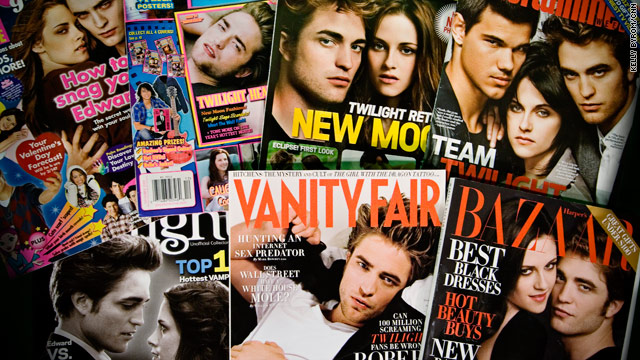 (CNN) -- Are they or aren't they a couple? That's the multimillion-dollar question fueling the "Twilight" franchise.

According to gossip magazines, Robert Pattinson and Kristen Stewart have been hooking up, breaking up, making up and shacking up for the past year. And as long as Pattinson and Stewart manage to keep fans guessing about the status of their relationship, they will manage to keep them captivated, helping to drive the box office sales for a movie that could have one of the biggest opening weekends of all time.

"Rob and Kristen become significantly less interesting as they confirm their love. The intrigue over Rob and Kristen stems from their youthful lust, and passion, and on-and-off, whirlwind relationship," said Jared Shapiro, executive editor of Life & Style Weekly, the first weekly magazine to put Rob and Kristen on their cover. "It's part of the fascination, that while real, they are also part fantasy."

Early on in the Rob-Sten (as MTV has begun to call them) mania, the pair issued denials of their love. Stewart claimed that in Rob she had found a "good buddy." Rob joked that he had asked Kristen to marry him several times but she just kept denying him.

But the press just kept digging, and as "New Moon" and "Eclipse" began filming in Vancouver the press was voraciously searching for any evidence at all that Rob and Kristen were an item: overanalyzing hand-holding on set, a steamier-than-expected love scene. Some outlets even called in body language experts to decode what a foot placement or arm cross meant for their relationship status.

"I must say the more forthcoming they have been lately with their romance, the more satisfying it is for me as an editor," Shapiro said.

As the opening of "New Moon" has gotten closer, jokes and denials have been replaced by radio silence and indignant how-dare-you-ask-me-thats.

Pattinson was ushered out of a radio interview this week by a handler after radio host Ryan Seacrest dared to ask him about his relationship with Stewart. Pattinson initially tried to work around the question but his staff, angry with Seacrest, gathered the star and told him his time was up.

Journalists who have been granted access to the stars prior to the movie's release have been told by the film's publicity team that they were not allowed to ask questions about their love life, especially when it comes to Pattinson and Stewart.

Stewart recently told Entertainment Weekly, "I probably would've answered [the romance question] if people hadn't made such a big deal about it. But I'm not going to give the 'fiending' an answer." ("Fiending" meaning celebrity press, of course.)

Bonnie Fuller, current editor-in-chief of HollywoodLife.com and former head of magazines such as US Weekly and Star, believes that Stewart and Pattinson are actually a couple, confirmed by photos of the pair holding hands in Paris that emerged last week, but said that the dialogue the romance has created has absolutely helped to fuel the frenzy around the franchise.

"I think the romance is real. Look at the paparazzi pictures of them holding hands. I don't think they are a set-up," Fuller said. "Of course it is going to boost ticket sales and I think the producers just had the fortunate situation of having had their stars falls for each other."

Real or faux, on-set romances don't always translate into dollars at the box office. Persistent rumors of a love affair between Brad Pitt and Angelina Jolie on the set of "Mr. and Mrs. Smith" generated enormous buzz for the film, which opened to more than $50 million in box office sales.

On the flip side, romantic ties between Ben Affleck and Jennifer Lopez could have contributed to the disastrous performance of their joint project, "Gigli," at the box office. "Gigli" generated only $3 million in its opening weekend.

"Co-star coupling is a mixed bag," said Borys Kit, senior film writer for The Hollywood Reporter. "Jennifer Lopez and Ben Affleck were dating when 'Gigli' became one of the biggest bombs of the decade because they were an unpopular couple to begin with. But on the flip side you had Brad Pitt and Angelina's romance helping to make 'Mr. and Mrs. Smith' a hit."

This Rob-Sten relationship could be one of two things. It could be a complete fauxmance, with Rob and Kristen playing the part of lovers to raise fan curiosity and drive interest in their films -- or they truly could have fallen in love, as so many actors have done before them, while spending endless hours together on the set.

Regardless of whether it is fauxmance or true romance, there is no denying that their refusal to discuss their romantic involvement just makes people hungry for more and drives them into the box office.

"Twilight" grossed more than $400 million in worldwide sales. "New Moon" had the most advance ticket sales of all time, according to online ticketer Fandango.com. The Hollywood Reporter projects that the film will make at least $85 million in its opening weekend.

"Whether they are dating or not is almost incidental at this point," Kit said. " 'New Moon' is going to be huge regardless of Rob and Kristen dating."