Some parents wary of 'New Moon' 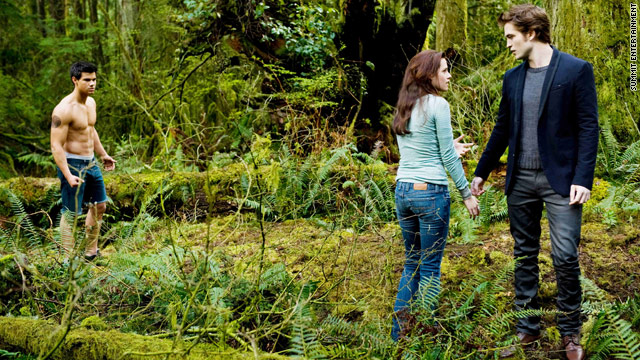 (CNN) -- Not everyone is as psyched for Friday's "New Moon" release as the "Twi-hards," the "Twilight" series' hard-core fans.

Many parents of tween girls are on the fence about letting their daughters see the vampire romance, saying they are worried the film sends the wrong messages about self-esteem to young girls.

Heather Sokol, 32, of Westfield, Indiana, is between a rock and a hard place. She has already bought advance tickets to see "New Moon" for herself, but she refuses to let her 11-year old daughter, Stacia, see it.

Stacia is quite displeased, said Sokol, but mom is holding firm.

Video: iReporter goes to 'New Moon'
Start a conversation
Liz Perle, editor-in-chief of Commonsense Media, a media literacy organization that rates movies, books and Web sites, explained that parents need to work out exactly what their own feelings are about the "Twilight" series and what exactly their values are to develop a strategy for dealing with the films and their children.

"When you are dealing with media that children see as aspirational, as a parent you have to ask whether you buy the values it promotes and if the answer is yes, go buy popcorn, and if the answer is 'yes, but ...,' then you need to know how to finish that sentence," Perle said.

"Use the movie as an open window into finding out what your kid's take-away is. If it is normalizing something that you don't want normalized then talk about it with them. Talk about your own relationships and the world of dating and the importance of self-esteem. Talk about whatever it is your values are."

Commonsense Media recommends the book "New Moon" for children 13 and older and has not yet rated the film version.

"We recommended the book for 13 and up because it is all about dating and this is around when kids start to date. They may have crushes before then but that is when they start acting on them," Perle said. "But because of the popularity of this particular series we are going to be dealing with kids younger than 13 who want to see it and that is when it is in the parent's hands."
RELATED TOPICS

"I think the content is too advanced for a tween," Sokol said. "She is pouty for sure. A few of her friends are two years older so she is frustrated that I won't let her see it. I have always been upfront about my reasons. I flat-out told her it was a young adult novel and the content is not suitable for her age group."

"New Moon," based on the second book in the popular series by Stephenie Meyer, is rated PG-13 for violence and action, so it is recommended that parents make a more vigilant decision before letting a child under 13 see the movie. But because "Twilight" has dominated tween culture, many in the under-12 age group have relentlessly begged parents to see the movie this weekend.

Kimberly Noe, 46, has tried to combat the "Twilight" mania in her home -- where her daughter Daisy, 11, nabbed the household's Robert Pattinson issue of Vanity Fair before anyone had a chance to read it -- by framing the saga detailed in the movie and in Meyer's books as sheer ridiculousness.

"I read the books myself and saw the movie, and we do a lot of defensive talk like 'this is so dumb,' when it comes to the plotlines," she said. "I think Daisy realizes it is such a negative in our house she's not as rabid as talking about 'New Moon,' as she was about 'Twilight,' " Noe said.

She added the "Twilight" franchise's pervasiveness has made it difficult to shut out.

Months after the first installment of the series, "Twilight," had been released on DVD, Natalie Hjelsvold, 38, sat down to watch the film with her 9-year old daughter Ashlyn.

"I spent the entire movie interjecting things like, 'boys don't think about girls like that,' 'boys won't stare at you across the parking lot like that,' 'boys don't spend all day thinking about you and wishing you were sitting beside them in class,' 'boys won't sniff your hair,' " Hjelsvold said. "I think it got on her nerves after a while, but I worry that she will develop this totally warped sense of love and it makes me crazy as a parent."

It isn't sexual innuendo or violence that has parents worried. It's the all-consuming obsession that the main character Bella, played by Kristen Stewart, has for Pattinson's vampire Edward Cullen. For parents who want to raise self-confident girls who first and foremost love themselves, it is hard for them to stomach 18-year-old Bella's all-encompassing and self-destructive passion for Edward. Did you see"New Moon?" Share your review

Rachel Holzman, 46, is allowing her daughter Ellie to see "New Moon" only after Ellie proved that she understood that Bella's obsessive compulsiveness over a boy wasn't something she should aspire to.

"She is going to get to see the movie because the bell has already been rung. There is no way I can keep her from it because I already let her read the books and all her friends have seen it, but I do have concerns," Holzman said.

"Luckily when I talked to her about it, Ellie related to me in a very matter-of-fact way about the ridiculousness of this girl becoming completely depressed over a boy, and I think it is because I have raised her to value herself more than that."

In the second installment of the series, Edward leaves Bella because he believes she is better off without him in her life. Bella is heartbroken, but discovers that the supernatural Edward appears before her when she is doing something dangerous or harmful to herself. This leads Bella to attempt cliff diving and dangerous motorcycle stunts that endanger her life.

"This 'I will do absolutely anything and everything for another person' is not a good image for young girls," Noe said. 'I don't want my daughter to believe that she should do anything just to be liked by a boy and at the end of the day I'm going to have to explore with her what her conclusions about Bella are before I let her see the film -- but she will not be seeing it in the theaters."