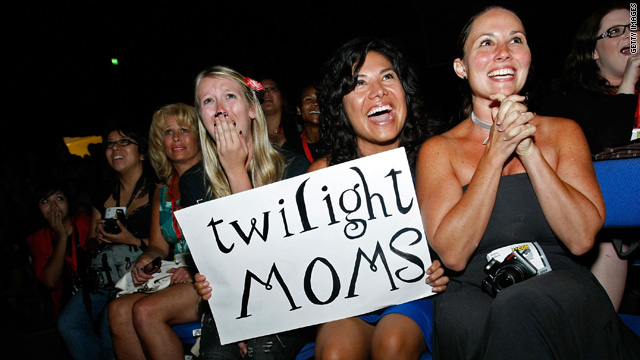 The cast of "Twilight" has the same effect on adults and tweens alike.
STORY HIGHLIGHTS
RELATED TOPICS

Lisa Hansen, for example, thought she had lost her mind the first time she read "Twilight." Partly because she's 36.

"I was absolutely worried that something was wrong with me," the Utah mother of two said. "I just couldn't put it down -- I was obsessed completely."

She picked up the first of Stephenie Meyer's vampire novels -- recommended by a teen neighbor -- with few expectations. After devouring it, she couldn't get the images of doomed love between a vegetarian vampire, Edward, and an awkward teenage girl, Bella, off her mind. Hansen thought about the books so much she seriously wondered if she was experiencing some sort of midlife crisis.

"I thought I was the only woman in the world who was my age and was just obsessed with books," she said.

In reality, far from it. Hansen is just one of the thousands of women around the world who have gotten caught up in the vampire frenzy.

While they resemble the youthful, squealing "Twilight" fans on occasion -- Kellan Lutz, who plays vampire Emmett Cullen in the films, admitted some of the mail he gets from older fans makes him blush -- they're still not the typical fan girls.

For starters, being so in love with "Twilight" when you're "of a certain age" can come with a healthy dose of shame.

"The stigma of it being a teenager's book was the biggest issue," Hansen said. "Everyone felt the same way I did, like, 'What's wrong with me? Why am I obsessing over this teenager thing?' "

But, one by one, the women began to find each other online, relieved that they weren't the only ones.

"As grown women we know that we never forget our first love, the first time our heart was really broken," Hansen explained of the often indescribable pull of Meyer's work. "I just think that so many women can kind of identify with the experiences and emotions and underlying message of how difficult it is to make choices in life."

Since so many of "Twilight" fan sites were overrun with teenagers, adult women have erected their own digital havens for fans who could take only so much of the "OMG Edward's so hot!!!" reaction to "Twilight." There's Hansen's Twilight Moms Web site, which she started for married women and mothers who want to revel in their "Twilight" fandom, and sites like 49-year-old Patricia Kopicki's, which is for any adult "Twilight" fan, parent or not.

Both of them say they get steady streams of messages from women thanking them for helping them come out of their "Twilight" closet.

"Many of us [fans] are happily married with kids, some as old as the male leads in 'Twilight.' Some of them jokingly refer to themselves as 'cougars' because of this, but it's used as a humorous way of saying we realize we are old enough to be Robert Pattinson's mother [and] we still find him attractive," Kopicki said.

The cougar comes out of the closet

Historically, any woman nearing menopause was expected to be at home, raising kids and uninterested in sex, said Valerie Gibson, who claims credit for the concept of the "cougar."

She hopes the love and lust many of these women display for the "Twilight" characters and the much younger actors who play them will turn the stereotype on its head.

"We've got a whole new social phenomenon of older women saying, 'Who told me sexuality would die? It hasn't! Here it is still burning away, maybe not for the guy I've been with for 30 years, but it's still there,' " Gibson said. "They're embracing it now."

Indeed, the "Twilight" fans are very aware of the age gap between themselves and the objects of their oft-sexy fantasies, and, when given the space to express it, they aren't the least bit ashamed.

Jenny, a 32-year-old financial administrator who runs an adults-only "Twilight" blog mature enough to make her shy away from providing a last name, said women have thanked her for being so openly crass about her love of "Twilight" because it frees them to express desires in a way they wouldn't in real life.

"We love to talk about how sexy Rob Pattinson is and what we would do if we got close," she said. "We feed off each other -- we can be these racy, silly, just kind of goofy women about this. No one's being judged for being married and saying, 'I'm 54 and I think this 23-year-old is absolutely delicious.' "

Jenny, who runs the "Twitarded" site from New Jersey with her 41-year-old friend Debbie, said the books and movies have given her a new creative outlet.

"I get excited over things that I never have before," Jenny said. "I've never followed celebrities before and all of a sudden I'm talking about E! Online and Access Hollywood, and my boyfriend is like, 'You don't even watch TV.' "

If Robert Pattinson is on, she does now -- and her boyfriend doesn't mind. Neither does Debbie's husband. These women, for the most part, aren't desperately single and looking for love through a fictional book about teens, Debbie said.

"I wouldn't go back to dealing with teenage love in a million years. I'm happily married and I have a great relationship, so it's not that I feel that 'Twilight' is filling a void," Debbie added. "The appeal is that it's very simple and pure and it outlines this love story of someone who's average and normal with this stellar, amazing person who has eyes for no one but her and could save her from anything." Fans camp out for "New Moon"

It's the fantasy romance of Edward and Bella -- which all of the women acknowledge could never actually happen, a sign of maturity younger fans don't often express -- that inspires them to put some intensity back into their real-life relationships.

"It's helped relationships, because [the fans] are happier nowadays. They have more friends, even if it's just online friends, [and] they're racier now. We hear all the time that people's sex lives haven't been the same since," Debbie said.

Oddly enough, there's no sex in Meyer's novels, at least nothing that couldn't be replicated in the PG movies they're based on. That hasn't stopped the fans from creating their own sex scenes in copious amounts of fan fiction, some of which have themes like "Edward and Bella do steamy office affair," or "Edward and Bella try out S&M."

"It's a rekindling of old feelings, because when you're married and you've got kids and you're running around to the soccer and basketball and football games, [and you've got] work, bills ... the relationship gets pushed off to the side," explained Kopicki, herself a mother of two teenagers.

"Your husband may not look exactly like Edward, but just as men have their fantasies, women do too and they need to be able to express it," she added. "A book like 'Twilight' has brought that out."

Twilight Moms, by contrast, aims to keep things family-friendly. Hansen said she wanted the site to be something a woman can browse while in the presence of her kids. Nevertheless, Hansen acknowledges that even the more subdued older "Twilight" fans admit feeling attracted.

"Edward is just in a 17-year-old body, but he's actually 108," Hansen said with a laugh. "I have a friend who said she's able to justify her love for Jacob because she counts his age in dog years."

But when the actors are under 18, like Taylor Lautner, the 17-year-old who plays Jacob, is, all of the women agree that a line has to be drawn on the swooning.

"We're very careful about that, because even to me that would feel creepy," Hansen said. "And then we have the mothers who say, 'oh my gosh he's the same age as my son!'"

But, the fans said, no one's actually expecting to date Lautner, Pattinson or Lutz. In the end, the obsession with "Twilight" is all in the name of a good time between mothers and daughters, or new friends.

"We're having a really, really fabulous time being 30, 40, or 50. We're very unapologetic of our age," Jenny said. "Women are saying 'so what, I'm 45, I'm married, I have children, but there's no reason why I can't say that Robert Pattinson is hot.'"