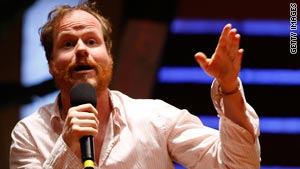 London, England (CNN) -- Film-maker Joss Whedon says he wants to buy the rights to the multi-million dollar "Terminator" franchise -- not for millions, or hundreds of thousands of dollars, but for ten grand.

The "Buffy the Vampire Slayer" creator made the unlikely bid in an open letter to the owners of the franchise posted on fan site Whedonesque.

After four movies and a TV series, the franchise does not seem to pack the same punch as it once did at the box office.

By comparison, 2003's "Terminator 3: Rise of the Machines," which, unlike its sequel, did at least feature Arnold Schwarzenegger, took in $433 million.

Nevertheless, rights to make new Terminator films are expected to garner more than $60 million at auction, as first reported by the Financial Times.

FTI Consulting, which is managing the auction, told CNN that major film studios, independent producers and investment funds are all following the sale.

Whedon's bid may be far fetched, but the letter -- written in characteristically irreverent style -- has bloggers and fans wondering just how serious he is about reworking the franchise.

New York Magazine's Vulture blog referred to Whedon as being a "facetiously interested" bidder while fans on Whedonesque offered to pitch in for the cause.

In his letter, posted on Monday, Whedon writes: "The 'Terminator' story is as formative and important in our culture -- and my pretend play -- as any I can think of. It's far from over."

Whedon, the force behind the "Buffy" and "Angel" TV series, as well as the short-lived "Firefly" and new show "Dollhouse," outlines six apparently jokey ideas for the franchise in the letter.

He writes: "Christian Bale's John Connor will get a throat lozenge. This will also help his Batwork (ten grand for that franchise too, btw.)"

Whedon also suggests sending a Terminator to Middle Earth, who helps because "he's a cyborg and he doesn't give a s#&% about the ring -- it has no power over him!"

But Whedon, who wrote the memorable "Once More, With Feeling" musical episode of "Buffy," draws the line at incorporating song into the "Terminator" concept.

But under his direction, "the movies will stop getting less cool," Whedon writes.

Kevin Shultz, senior managing director at FTI Consulting who is leading the deal, told CNN that he was not aware of any serious proposal made by Whedon.

Whether a $10,000 bid would be even considered in an auction expected to fetch tens of millions, Shultz said: "The numbers speak for themselves."

And Whedon, who ranks high in geekdom, admits he may not be a serious contender.

But there is a sincerity of sorts behind his far-fetched bid.

"I adore the franchise. I literally did learn a huge amount from that [franchise]. ["The Terminator"] came out when I was in college, and I was like, This is how you construct a story. It's very important to me. That part was true. The part where I think I'm going to get it, not so true," he was quoted as saying.