(CNN) -- A jury began deliberations Wednesday in the trial of two people accused of attempting to extort $25 million from actor John Travolta. 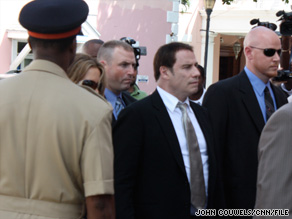 John Travolta, center, and his wife, Kelly Preston, walk into court in the Bahamas in September.

Tarino Lightbourn, a paramedic, and former Bahamian Sen. Pleasant Bridgewater -- who also is Lightbourn's lawyer -- are on trial on charges they attempted to extort money from Travolta following his son's January 2 death from a seizure.

The money allegedly was to be paid in return for not making public a document Travolta signed in which he declined to have his 16-year-old son, Jett, transported to a nearby hospital. Lightbourn and Bridgewater have pleaded not guilty.

Travolta refused to comply with their alleged demand for money.

Earlier in the trial, Travolta testified that Jett was found unresponsive by a nanny at their home on Grand Bahama Island, where the family was spending their New Year's holiday.

Travolta said he initially told the ambulance driver to rush them to an airport where his private jet was parked and where Travolta, who is a pilot, planned to fly his son to a West Palm Beach, Florida, hospital instead of driving him to one in nearby Freeport.

The actor testified that while he and his wife, actress Kelly Preston, were riding in the ambulance with their son, they decided to take the teen to the hospital, instead of flying to Florida.

When the couple decided to drive Jett Travolta to the hospital, Lightbourn asked Travolta to sign a statement releasing the ambulance company from liability.

"I received a liability of release document. I signed it. I did not read it. Time was of the essence," Travolta testified.

At the hospital, the actor was told his son "wasn't alive," he said.

Travolta testified that he later learned of a demand for $25 million or "stories connected to that document would be sold to the press. ... The stories would imply the death of my son was intentional and I was culpable somehow."

An attorney representing Bridgewater and Lightbourn asked Travolta if the defendants ever contacted or threatened him directly. Travolta said they did not, that he heard specifics about the situation through his attorneys.

Travolta's attorney, Michael McDermott, testified that Bridgewater told him the "document would show [Travolta] killed his son or was negligent in the death of his son."

Also, McDermott told the court that Bridgewater claimed the form was evidence that Travolta was "trying to flee the country with his dead son."

No money was discussed, said McDermott, but Bridgewater believed her client, Lightbourn, thought the release was valuable to the media. McDermott testified that Bridgewater said, "My client put it this way, the document could be Mr. Travolta's or it could be the world's."

McDermott testified that learned from a fellow Travolta lawyer that Bridgewater's client wanted $25 million to not release the document. McDermott said he contacted authorities and later met with Bridgewater in a Nassau hotel room for a conversation secretly recorded by Bahamian police.

The price for keeping the document under wraps was dropped through subsequent phone conversations from $25 million to $10 million -- to which Bridgewater's client agreed, McDermott testified.

All About John Travolta • Trials • Bahamas