Parents upset, bored by 'Where the Wild Things Are'

(CNN) -- Parents may have fond memories of Maurice Sendak's classic children's book, "Where the Wild Things Are." But if their social-networking postings are any indication, some are not pleased with the movie. 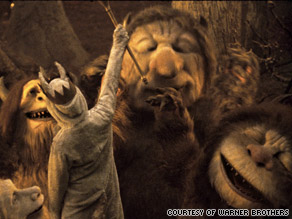 The creatures may look scary, but parents said their kids didn't find them so wild.

"It was joyless. There were maybe 15 minutes of the hour and a half that my kids were into it," said James Griffioen of Detroit, Michigan.

His 4-year-old daughter asked, "Why is this movie so sad?" in the middle of their family's matinee viewing, while his son, a 20-month-old who normally can't get enough of the 1963 children's classic, was simply bored, he told CNN.

"I think the book is almost designed for the 1-to-4 age group," said Griffioen, 31. "The text is so simple, and it fits in with the other books that are appropriate for that age level, which is why the movie is so strange because it seemed much more dedicated to the 8-to-12 age group."

Watch a review of the movie »

Movie critics were, on the whole, approving of the PG-rated film, though the poor reviews were particularly scathing. "I have a vision of 8-year-olds leaving the movie in bewilderment. Why are the creatures so unhappy?" wrote The New Yorker's David Denby. iReport.com: Mom of four shares her review

The heavily publicized film, which opened in theaters last Friday and debuted on top of the weekend box office, seemed to do too much, said Griffioen. He thought much of the problem lay in the script, by director Spike Jonze and author Dave Eggers, which expanded on the 10-sentence children's book.

"As someone who reads that book to his kid every day, I wanted it to be a movie he could be thrilled about. I think there almost wasn't enough of a fear element -- there was never a moment when my [20-month-old] was crying. He was totally into the scenes when they're throwing stuff at each other, because that's what he's accustomed to from the book."

But Jason Avant, founder and editor of parent-focused review site Dadcentric.com, thinks taking children any younger than 5 is pushing it, because they'll probably end up bored or scared. Several reviewers have said that the movie has more of an adult perspective and that its PG rating is earned. Avant and his 5-year-old son loved the movie when they caught a matinee last weekend.

"Family movies and kid movies have become so safe and homogenized and shallow in a sense," Avant said. "['Wild Things' is] such a real depiction of how a kid acts -- the mood swings, the temper tantrums. My son is like that: he's happy as a clam one minute and he's throwing a tantrum the next; everything is so urgent and immediate. It was interesting to watch him watch it, and I think it struck a chord with him in a way that kept him interested."

For Devon Adams in Chandler, Arizona, the problem wasn't keeping his 5-year-old daughter, Claire, interested -- it was dealing with the aftermath of the violent scenes.

"She and her friend seemed to enjoy the film, but when she returned home, she threw her own tantrum, bit her mother very hard (something she does not do), and told her she was going to run away from home and go to where the wild things are," Adams said.

Adams, a high school English teacher who considers himself to be a big "Wild Things" fan, expected "a story about a boy throwing a tantrum and being sent to his room without dinner, [imagining] going away to a far off land where he feels important, and eventually realizes that he misses his family and returns home."

In his view, what he got was radically different.

"I did not expect a film that promotes a weak parent figure who fails to seem to be concerned for her children, a main character who truly seems to need a therapist and a 'Wild Thing' that throws temper tantrums by destroying private property and physically abusing others," Adams said.

Frequent iReport reviewer Rajiim Gross said his 4-year-old granddaughter seemed to enjoy the film, but he did not. "It was just dull through the whole thing," Gross said, noting that he saw several people in his Fort Thomas, Kentucky-area theater fall asleep during the movie. Watch Gross give his review

Griffioen thought the original story's ferocity was dampened by the more adult themes.

"[They] took this book about imagination and escape and turned it into an hour and a half of Muppet therapy," he said. "There were obvious themes of working on divorce pains, but Max was the king of all wild things, not a family therapist. The kid uses his imagination to work through all of his issues, but that's something that you do when you're 22 and in college, not something you do when you get in your boat and sail off to where the wild things are."

But, said reviewer Avant, someone Griffioen's age is probably a better audience for the film.

"It's definitely aimed at adults," Avant said. "I wouldn't necessarily call it a kid movie, but rather a movie about being a kid."