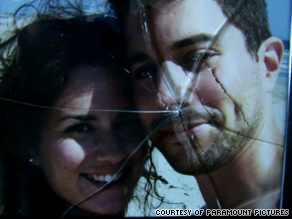 "Paranormal Activity" tells the story of a couple determined to discover if their house is haunted.

Using a campaign of limited showings, social media and word-of-mouth fan buzz, the film has managed to become a breakout hit without the aid of a glitzy marketing campaign -- or even a traditional movie trailer.

According to Variety, the very low-budget film (it reportedly cost $11,000), which played in fewer than 200 theaters, raked in $7.1 million over the weekend -- a record for a limited-release film. The film had an impressive $44,163 per-screen average and placement in the top five of the box office ratings over the weekend.

"We think it's exciting that they are taking this grassroots approach to independent film because sometimes independent films do get lost in the shuffle," said Kevin Carr, a writer/reviewer for the site Film School Rejects. "It's a unique test to see if people can demand things outside of standard marketing campaigns."

"Paranormal Activity" bills itself as "the first-ever major film release demanded by you."

The movie, which was an audience favorite at the alternative Slamdance festival in early 2008, was acquired by Dreamworks (then a part of Paramount Pictures) two years ago.

The studio initially planned to remake it using better-known actors. But after studio executives, including Steven Spielberg, viewed it, they decided the film could stand more or less as it was (though director Oren Peli did shorten the film and shoot a new ending).

The movie gained buzz after Paramount began late-night screenings in college towns, and fans took to Twitter and other sites to hail the scary flick, which centers on a young couple who believe their house may be haunted.

Paramount increased the interest by urging fans to sign on to ParanormalMovie.com and demand theaters in their locations show the film.

Peli posted a video on YouTube expressing gratitude to the fans and urging them to continue rooting for the movie.

"I just wanted to take this opportunity to speak directly to the fans and thank you all for the amazing support," Peli said on the video. "It's just been overwhelming especially considering the long road this film had for three years and the studio wanting to do a remake."

More than a million people have heeded the call. The result has been a groundswell of interest rivaling that of big-budget films.

Megan Colligan, co-president of marketing for Paramount, said the studio had a limited budget for advertising the film, so its marketing had to be tightly targeted.

Moreover, condensing its atmosphere into a 30-second TV spot was a challenge, so executives opted to produce a trailer showing fans waiting in line for the movie and their reaction to the film, said Josh Greenstein, who also serves as co-president of marketing for Paramount.

"It was very important that we sold this as an experience and rather than just a movie," he said. "When people saw the movie they loved it so much and there is such a slow build of terror that you have to sit through to experience the full effect of the movie, so we changed the marketing techniques in advertising and online to make it more experiential."

The unique marketing campaign appears to have paid off.

"The fans have really made this their film and they are doing the bulk of the work [to market the film]," Colligan said.

"The film is selling itself," Greenstein added.

Critics have also taken notice, and have showered the film with good reviews.

In giving the movie an A-minus grade, Entertainment Weekly film critic Owen Gleiberman wrote "With its this-is-really-happening vibe, 'Paranormal Activity' scrapes away 30 years of encrusted nightmare clichés. The fear is real, all right, because the fear is really in you."

Moviegoers agree. Rajiim Gross, an iReporter who posted a review of the film, said he found "Paranormal Activity" to be much better than "Blair Witch Project," another indie-horror film to which it is being compared. Check out Rajiim Gross' iReport

"It actually scared the hell out of me," Gross said. "I saw it during the day and I would hate to be someone who went home after seeing it late at night."

Gross said he believed the studio was smart to leverage the Internet to spread the word.

"The best advertising is word of mouth," Gross said. "People tell 10 friends, they go see it and they tell 10 more friends and soon you have an entire community who wants to see it."

Carr, whose Film School Rejects site has been following the frenzy, said the movie "gets inside of your head" and benefits from the traditional fan support that horror films often enjoy.

That, coupled with the big cinema thrills and chills, should add up to continued box office success, Carr said.

"Watching it with 250 strangers in a movie theater and getting everybody to jump at the same time definitely has an effect," he said. "It's the event film right now of the year, which is something that needs to be experienced."