ZURICH, Switzerland (CNN) -- Woody Allen, Pedro Almodovar and Martin Scorsese have "demanded the immediate release" of fellow filmmaker Roman Polanski, who was arrested in Switzerland on a U.S. arrest warrant related to a 1977 child sex charge. 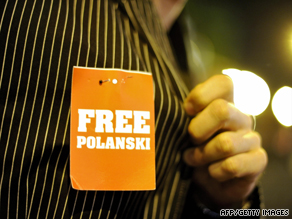 A supporter displays a "free Polanski" tag on his shirt during the Zurich Film Festival.

They were among 138 people in the film industry who signed a petition against the arrest.

Polanski was on the way to the Zurich Film Festival when Swiss police detained him in response to the American warrant.

The filmmaker pleaded guilty in 1977 to having unlawful sexual intercourse with a minor but fled before he could be sentenced. He settled in France, where he holds citizenship. Investigators in the United States say Polanski, then 43, drugged and raped a 13-year-old girl.

The filmmakers objected to his being arrested en route to the film festival, which held a tribute to him this year.

"It seems inadmissible to them that an international cultural event, paying homage to one of the greatest contemporary filmmakers, is used by the police to apprehend him," said the petition, backed by France's Societe des Auteurs et Compositeurs Dramatiques (Society of Dramatic Authors and Composers).

"The arrest of Roman Polanski in a neutral country, where he assumed he could travel without hindrance ... opens the way for actions of which no one can know the effects," said the signatories, who also included actresses Monica Bellucci and Tilda Swinton and directors David Lynch, Jonathan Demme, John Landis, Alejandro Gonzalez Inarritu and Wim Wenders.

"We are calling every filmmaker we can to help fix this terrible situation," his company told CNN in a statement.

Polanski has filed an appeal against his extradition to the United States, Swiss authorities said. They added that they would act on the case within weeks.

Polanski won an Academy Award for Best Director in 2003 for "The Pianist." He was nominated for a Best Director Oscar for "Tess" and "Chinatown," and Best Writing for "Rosemary's Baby," which he also directed.

On Monday, French Foreign Minister Bernard Kouchner said that he hoped authorities would respect Polanski's rights "and that the affair [will] come to a favorable resolution," the ministry said in a statement.

The French culture and communications minister, Frederic Mitterrand, said he "learned with astonishment" of Polanski's arrest and expressed solidarity with Polanski's family.

Polanski, 76, was arrested Saturday on his arrival at Zurich's airport.

A provisional arrest warrant had been issued last week out of Los Angeles, California, after authorities learned that he was going to be in Switzerland, Sandi Gibbons, spokeswoman for the Los Angeles County district attorney's office, said Sunday.

In a written statement, Polanski's California counsel said Monday that "an issue related to the Swiss extradition matter is presently being litigated before the California Court of Appeal. We had hoped that this would be determinative of this case."

"We were unaware of any extradition being sought, and separate counsel will be retained for those proceedings."

The lawyers -- Douglas Dalton, Chad Hummel and Bart Dalton -- said prior deputy district attorneys had told them that no efforts were being made to extradite Polanski, who "owned a home in Switzerland for many years and worked throughout Europe during that time."

There have been repeated attempts to settle the case over the years, but the sticking point has always been Polanski's refusal to return to the United States to attend hearings. Prosecutors have consistently argued that it would be a miscarriage of justice to allow a man who "drugged and raped a 13-year-old child" to go free.

The Swiss Justice Ministry said Polanski was "in provisional detention." But whether he can be extradited to the United States "can be established only after the extradition process judicially has been finalized," ministry spokesman Guido Balmer said in an e-mail.

Gibbons said the extradition process will be determined in Switzerland but said authorities are ready to move forward with Polanski's sentencing, depending on what happens in Zurich.

Polanski was accused of plying the teenage girl with champagne and a sliver of a Quaalude tablet and performing various sex acts, including intercourse, with her during a photo shoot at actor Jack Nicholson's house.

Nicholson was not at home.

Espinoza also appeared to acknowledge problems with the way the director's case was originally handled.

In the February hearing, Espinoza mentioned a documentary film, "Roman Polanski: Wanted and Desired," that depicts backroom deals between prosecutors and a media-obsessed judge who was worried his image would suffer if he didn't send Polanski to prison. The documentary was first broadcast in June 2008.

"It's hard to contest some of the behavior in the documentary was misconduct," Espinoza said. But he declined to dismiss the case.

Polanski's victim long ago came forward and made her identity public, mainly saying she was disturbed by how the criminal case had been handled.

Samantha Geimer, now 45 and a married mother of three, sued Polanski and received an undisclosed settlement. She is among those calling for the case to be tossed out.

In court papers filed in January, she said, "I am no longer a 13-year-old child. I have dealt with the difficulties of being a victim, have surmounted and surpassed them with one exception.

"Every time this case is brought to the attention of the court, great focus is made of me, my family, my mother and others. That attention is not pleasant to experience and is not worth maintaining over some irrelevant legal nicety, the continuation of the case."