(CNN) -- Roman Polanski is regarded as one of the finest directors of his generation, winning an Oscar for "The Pianist" and nominations for "Tess" and "Rosemary's Baby," but he is probably as equally well known for his own tumultuous life. 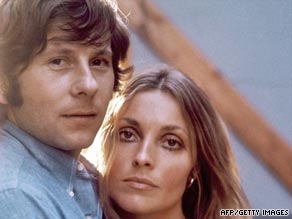 Roman Polanski and Sharon Tate are pictured together in London in the 1960s.

Polanski, who was arrested Saturday in Switzerland on a U.S. arrest warrant stemming from a decades-old sex charge, had lived in France for decades to avoid being arrested if he enters the United States.

The 76-year-old declined to collect his Academy Award for Best Director in person when he won it for "The Pianist" in 2003. He was en route to the Zurich Film Festival, which is holding a tribute to him, when he was arrested by Swiss authorities, the festival said.

Polanski was put in "provisional detention" and now faces the possibility of being extradited to the U.S., where a warrant for his arrest was issued in 1978.

The director pleaded guilty in 1977 to a single count of having unlawful sexual intercourse with a minor, acknowledging he had sex with a 13-year-old girl, but fled the U.S. before he could be sentenced.

Polanski was accused of plying the girl, then known as Samantha Gailey, with champagne and a sliver of a quaalude tablet and performing various sex acts, including intercourse, with her during a photo shoot at actor Jack Nicholson's house. He was 43 at the time.

Watch as filmmakers rally round Polanski »

She added that Polanski did not strike her as the type of man who would force himself on a young girl. "I don't think he's a bad man," she said in the report. "I think he's an unhappy man."

Polanski was born in Paris in 1933 of Polish-Jewish parents. Aged three, he and his family returned to Krakow in his father's native Poland. After the Nazis invaded his parents were sent to concentration camps: his mother was gassed at Auschwitz although his father survived the war.

The young Polanski survived the Krakow ghetto and "soared out of Poland on sheer personality," according to director Marina Zenovich, whose 2007 documentary "Roman Polanski: Wanted and Desired," paints a sympathetic picture of the exiled movie legend.

Growing up in war-torn Poland, the young Polanski found comfort in the cinema and in acting in radio dramas, on stage and in films. In 1962, Polanski directed his first feature-length film, "Knife in the Water." Poorly received in Poland it was a sensation in the West, and won an Academy Award nomination as Best Foreign Film.

He later moved to England, co-starring with American actress Sharon Tate, whom he married in 1968, in the Hammer horror parody, "Dance of the Vampires/The Fearless Vampire Killers, or Pardon Me But Your Teeth Are in My Neck."

Following his move to Hollywood, Polanski was at his peak: he was one of the hottest directors thanks to the critical and commercial hit Rosemary's Baby and he was married to the beautiful Tate.

"At a certain point in his life, Roman Polanski had a lot of hope," Zenovich told TIME magazine in 2008. "He was living this great life. He was so talented and everyone wanted to work with him."

But that hopeful period ended when Tate, eight months' pregnant, was murdered by followers of Charles Manson in 1969. According to TIME, Polanski spent the first years after her death on a kind of sexual spree, and began spending time with younger and younger women, like 15-year-old Nastassja Kinski.

When Polanski was arrested for assaulting Gailey, his case drew the attention of Judge Laurence J. Rittenband, who had earlier presided over Elvis Presley's divorce, Marlon Brando's child-custody battle and a paternity suit against Cary Grant.

Rittenband, in a manner reminiscent of the one-liner-dropping judge in the Anna Nicole Smith case, was obsessed with the media. He even had a bailiff maintain a scrapbook of his newspaper clippings, according court filings.

The case proceeded in a strange manner. Rittenband, who is now dead, first sent the director to maximum-security prison for 42 days while he underwent psychological testing. Then, on the eve of his sentencing, the judge told attorneys he was inclined to send Polanski back to prison for another 48 days.

The judge's bizarre behavior might have continued had Polanski not fled to France, where he has lived for the last 30 years, ultimately marrying again and having two children.

Polanski has continued to make critically acclaimed films, such as "Tess," an adaptation of the Thomas Hardy novel "Tess of the d'Urbervilles" which tells the story of a beautiful country girl (Nastassja Kinski) who is seduced by an older man. In 1981, he returned to Poland to direct and star in a stage production of "Amadeus." And 2002's "The Pianist," re-established Polanksi as a top-flight director.

There have been repeated attempts to settle the sex case over the years, but the sticking point has always been Polanski's refusal to return to attend hearings.

Espinoza also appeared to acknowledge problems with the way the director's case was handled years ago. Polanski's victim is among those calling for the case to be thrown out.

Now married and known as Samantha Geimer, she filed court papers in January saying, "I am no longer a 13-year-old child. I have dealt with the difficulties of being a victim, have surmounted and surpassed them with one exception.

Geimer, now 45, and a mother of three, sued Polanski and received an undisclosed settlement. She long ago came forward and made her identity public -- mainly, she said, because she was disturbed by how the criminal case had been handled.

Polanski was arrested two days after one of his wife's killers died. By her own admission, Susan Atkins held Tate down as she pleaded for mercy, stabbing the 26-year-old actress 16 times. Polanski was filming in Europe at the time.