(CNN) -- It has been 20 years since filmmaker Michael Moore took on General Motors in "Roger and Me." He's still sticking it to big business for what he sees as the deliberate shafting of the little guy. 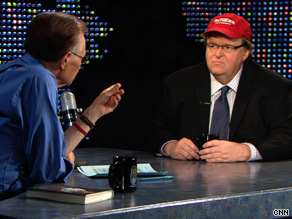 Moore talked with CNN's Larry King about whether capitalism is key to the American dream or the cause of an American nightmare. The following is an edited version of the interview.

Larry King: You describe this movie as the culmination of all the films you've made. Does that mean this is it?

Michael Moore: No. I hope not. It means that, for 20 years, as you said, I've been doing this. I started out by showing people what General Motors was up to and how this was a company that was making a lot of bad decisions and it wasn't good for the company nor for the country. That was 20 years ago.

And since then, I've covered a number of issues and different things. But it all seems to come back to this one issue of "follow the money."

Who's got the money? And whoever has the money has the power. And right now, in America, tonight, Larry, the richest 1 percent have more financial wealth than the bottom 95 percent combined.

King: You're in that 1 percent, though?

Moore: I don't think I'm in that 1 percent, but I make documentary films. But I mean, obviously, I do well because my films have done well. But, you know, even if I were, I think it's my responsibility -- my moral duty that if I've done well, that I have to make sure that everybody else.

King: Does well too or has a chance?

Moore: Well, has at least a chance but that -- and that the pie is divided fairly amongst the people and not just a few people get the majority of the loot and everybody else has to struggle for the crumbs.

King: Are you saying capitalism is a failure?

Moore: Yes. Capitalism. Yes. Well, I don't have to say it. Capitalism, in the last year, has proven that it's failed. All the basic tenets of what we've talked about the free market, about free enterprise and competition just completely fell apart. As soon as they lost, essentially, our money, they came running to the federal government for a bailout -- for welfare, for socialism. And I thought the basic principle of capitalism was that it's a sink-or-swim situation. And those who do well, the cream rises to the top and, you know, those who invest their money wrongly or, you know, don't run their business the right way, then they don't do well. Watch Moore talk about corporate greed

And if you run your business the wrong way, where does it say that you or I or anybody watching this has to bail them out?

King: You started filming before Lehman Brothers went belly up.

King: The stock market tanked. Now, how did the events, as it occurred, affect the movie? Did it change gears?

Moore: It didn't change in terms of what I was looking at, but it did, obviously, offer probably the best example of why this is a system that is really corrupt at its core -- corrupt because it doesn't, it isn't run with democratic -- small "d" -- democratic principles. There's no democracy in our economy. You and I and the people watching have no say in how this economy is run. The upper 1 percent, the people down on Wall Street, the corporate executives, they're the people that control this economy.

Moore: Oh, they sure do.

Moore: I'll tell you why. Because your employees are your biggest expense. And, as you've noticed in the last few months, as the unemployment rate has gone up, so has the Dow Jones. Now, you'd think, you know, that Wall Street would respond with "Oh, my God, unemployment is going up, you know, this is bad for business." But the reality is, is that Wall Street likes that. They like it when companies fire people because immediately the bottom line is going to show a larger profit.

King: Are you saying the investor is more important than the employee?

Moore: Yes. The investor -- and the investor, these days, they want the short-term, quick profit and they want it now. But in the long-term, here's what happened. When I was on this show 20 years ago, 20 years ago this week, I was here with "Roger and Me".

All About Michael Moore