LONDON, England (CNN) -- It could be Matt Damon's most weighty role to date. 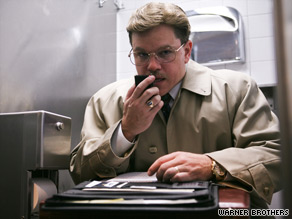 The athletic Bourne star gained 30 pounds, as well as donning a false moustache and prosthetic nose, to look the part for his latest role as salary man whistle-blower, Mark Whitacre, in Steven Soderbergh's comedy "The Informant!"

Damon remembers Soderbergh describing the look he hoped Whitacre would have in the film as "doughy."

"He just said 'doughy,'" Damon told CNN at the film's North American premiere during the Toronto International Film Festival earlier this month. "He didn't want [Whitacre] to have any hard edges, that's why I had a little prosthetic on the end of my nose and stuff like that.

Whitacre is a corporate executive at an agricultural giant who helps the FBI expose a price-fixing plot.

Soderbergh was also looking to break convention with his approach to the typically po-faced whistle-blower genre. The prolific U.S. director added a comedic twist to the tale, which is based on Kurt Eichenwald's non-fiction book.

"I was always looking for a way to set ourselves apart from the typical approach to this genre, of the whistle-blower movie. I just felt like, 'We've got to be different,'" the 46-year-old director told CNN. Do you have a favorite Steven Soderbergh film? Tell us in the SoundOff below

Previous movies about uncovering corporate wrongdoing like "The Insider" and Soderbergh's own "Erin Brockovich" have been shot as dramas.

In contrast with "Erin Brockovich" where there is a clear adversary in the form of California utility PG&E, Whitacre himself is the problem in "The Informant!" "He was his own bad guy," Soderbergh explained.

While greed and corruption are no laughing matter, Whitacre's "adversarial relationship with the truth," gave Soderbergh the opportunity to take a comedic approach, albeit with cynical undertones.

The plot shows Whitacre as a likeable but deceitful guy. Something Damon thinks adds complexity to the character.

"He was doing something, on the one hand, something really heroic and brave by collecting all this information to use against the company to make his case," Damon told CNN. "At the same time he had his own secrets and things he was doing on the side."

Over the past two decades, Soderbergh has distinguished himself by working dexterously across genres. Since he broke out with indie romance "Sex, Lies, and Videotape" in 1989, he's made a wide variety of movies, from crime drama "Traffic" to action capers in the "Ocean's" series to epic two-part biopic "Che."

When he came across Eichenwald's book, "The Informant: A True Story," in 2001, Soderbergh had already directed Julia Roberts to a Best Actress Oscar for her portrayal of an unlikely environmental crusader in "Erin Brockovich."

But he felt that taking the straight approach with "The Informant!" would just be a rehash of what had been done before and realizing there's "something very, very funny about watching people lie on screen," he opted to forego the dramatic route.

In another bid to set the film, which debuted at Venice and also screened at Toronto, apart, he relied solely on Eichenwald, an investigative reporter for the New York Times, for an account of what went on between Whitacre, his company Archer Daniel Midlands and the authorities.

Soderbergh typically conducts extensive research when he shoots films based on real people and events. On "Erin Brockovich" and "Che," he met with everyone who was available to meet.

But this time around, "if I had a factual question I would call Kurt," he recounted. "I didn't want to be distracted by [the actual people's] personal feelings about what happened. I just wanted make sure that everything that happened was accurate."

As for what's ahead, Soderbergh appears to have developed a fondness for avoiding the straight approach.

"Well, I always feel like we need to laugh more. And I'm beginning to think that making everything a comedy is almost a good idea," he said and then after a pause, "It depends."

Mairi Mackay contributed to this report