(Entertainment Weekly) -- Punctuation promises comedy in "The Informant!" as if the title subject is a cartoon secret agent -- maybe Agent 86 in "Get Smart." 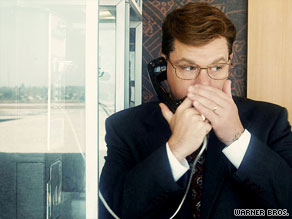 Matt Damon, as a corporate turncoat, offers up secrets in "The Informant!"

But he's not. The whistle-blower worthy of an exclamation point in this groovy-looking, chuckle-baiting, fact-based movie from protean director Steven Soderbergh is Mark Whitacre (Matt Damon), a biochemist and well-placed executive at the agri-processing giant Archer Daniels Midland (ADM) in Decatur, Illinois.

It's the early 1990s. The company man is helping expose ADM's alleged global price-fixing activities to the FBI, cooperating with the feds long enough to gather invaluable evidence. But what Whitacre doesn't confide to his FBI handlers, and what his wheat-colored jackets, Dilbert ties, and weakling mustache hide, at least at first, is that this inside source is not completely trustworthy.

Damon, fattened up to fit his boxy suits, wears Whitacre's slack demeanor beautifully. The star -- who has quietly and steadily turned into a great Everyman actor -- is in nimble control as he reveals his character's deep crazies.

Watch why Damon gained 30 pounds for the role »

Soderbergh's amused study of the highest-ranking corporate whistleblower in U.S. history is adapted from "The Informant: A True Story," an amazing, deeply reported book by New York Times reporter Kurt Eichenwald. That book told the story without editorial eye-rolling. But somewhere between Eichenwald's journalistic attention to detail and the bubbly, dialogue-besotted script by "The Bourne Ultimatum's" Scott Z. Burns, Soderbergh has chosen to apply an attitude of arch whoopee, a greasy veneer of mirth over what is, no joke, a serious mess of malfeasance and mental instability.

It's tempting to laugh, but what's the joke: Whitacre? ADM? The FBI? The fashion trends of Decatur? Smarty condescension lurks behind the suburban bushes.

Had a '90s date and place card not been supplied, I would have remained in an honest muddle about the era depicted on screen. And since Whitacre is subliminally likened to bumbling, fictional Maxwell Smart, that's probably as the filmmaker intended. The artistic choice is reinforced by a '70s-era "Laugh-In" aesthetic seen in everything from the smiley yellow novelty typography of the opening credits to the fancy rubber-chicken music served up in heaps of horns and whistles by essence-of-'70s composer Marvin Hamlisch. Sock it to me.

Playing it straight and letting his Sam-Donaldson-meets-Spock hairdo suggest otherwise, Scott Bakula makes an appealing FBI agent with a deadpan grimace just this side -- or maybe it's the other side -- of "Dragnet's" Joe Friday. Comedian Joel McHale from E!'s "The Soup" plays the fellow agent who stares with big round eyes while his partner squints at Whitacre's successive leakages of truth/lie/ truth/lie.

The always wonderful, huggable Melanie Lynskey, who stole the show in "Away We Go," does more great wifely work as Ginger Whitacre, her husband's biggest booster. A valued subset of Soderbergh's audience is sure to dig iconic hipster comic brothers Tom and Dick Smothers in small roles. In fact, the wily pair would fit right in with an "Ocean's Whatever" cast of coolios, enjoying some retro-style ensemble fun, regardless of whether the audience does.

Soderbergh is as smart, stylish, and attentive a filmmaker as they come. And there are moments in "The Informant!" when I can almost be convinced that the tonal feints he establishes at the intersection of joke and no-joke are seriously, thoughtfully meant to replicate the misaligned synapses in Whitacre's own head. iReport.com: Damon's latest worth checking out

But if that's the intention, Soderbergh ultimately made the choice to abandon interesting, dispassionate empathy for the more quick-fix payoff of amusement. As Whitacre goes through his days, Damon recites interior monologues of distracted observation in voice-overs meant to demonstrate how his character's unusual brain works.

In "The Informant!", that brain -- screwy and yet capable of doing important undercover work -- free-associates like Ellen DeGeneres on a swing through Walmart. Cute, but as even Agent 86 would say in "Get Smart": Missed it by that much.

All About Matt Damon • Steven Soderbergh