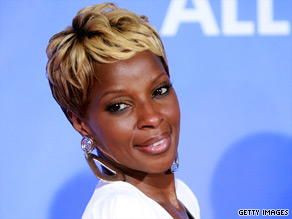 With music credentials like that, the "Queen of Hip-Hop Soul" needed a new challenge. So Blige decided to stretch her range to the big screen.

The singer stars in the new Tyler Perry film "I Can Do Bad All By Myself" alongside Oscar nominee Taraji P. Henson, Perry and Gladys Knight.

Being in the film allows Blige to test her acting chops and sing as well. Her character, Tanya, is a club owner who takes the mic at least twice in the film. And whether she's in character or not, Blige's ability to communicate a song can take your breath away.

CNN spoke with Blige about Tyler Perry, her acting angst and music. The following is an edited version of that interview:

CNN: What does the title of the film "I Can Do Bad All By Myself" mean?

CNN: Were you nervous about acting in this film?

Blige: I was definitely nervous, because acting is not my first profession, so I had to go and get an acting coach and really figure this thing out. It helped a lot. It relaxed me to have a little more information about it.

And I find that actors are highly underrated; they don't get all the credit they deserve, because this is a hard job. That's a hard job.

CNN: Were you bitten by the acting bug?

Blige: Well, I'm gonna be open to scripts, and I'm ready to receive more scripts from anywhere. I know I'm definitely gonna pursue this as a profession, acting. I was definitely bitten by the acting bug.

CNN: Did you feel any pressure to write songs for this film, as opposed to writing for one of your albums?

CNN: Do you want to hear poetry in your lyrics?

Blige: I would love to hear poetry in my lyrics.

CNN: Tell me about Tyler Perry.

Blige: Wow, working with Tyler Perry was -- it's always a treat. He's the most kind, generous, you know, supportive professional man. He's a really good person to have in such a tough business. It's like a pillow for your head. ... You just get to lay on it after laying on rocks for so long.

CNN: What is the link between spirituality and music in the film and in life?

Blige: Well, I think the link with the spirituality and the music is that we all have a place where we need to go to heal, and most of the time people go to music to heal. Whether it be gospel or secular, but it all comes from some song that pulled you through your life or helped you through college or something like that.

Blige: I definitely feel this film is a lot about redemption. You saving yourself first of all, and believing you can be saved and wanting the help.

I think it takes time for people to heal from whatever wounds they're healing from. But in order to get free, what I learned is that you have to release it, because you'll stay stuck for the rest of your life.

What if this person is enjoying their lives and you hate them? So it's just best to release. Easier said than done, please believe it.

CNN: What do you think about the music industry these days?

Blige: Well, I mean, the music industry has moved with the times. You know, I mean we are in the age where technology has taken over and music is technology now, so it's not hands-on. It's a little sad that there isn't any more record stores.