Blending in on campus reportedly not so easy for 'Potter' star

(CNN) -- Emma Watson may have wanted to just blend in when she started her freshman year recently at Brown University, but it seems not everyone has the same idea. 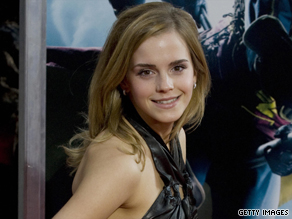 The actress, best known for her role as Hermione Granger in the "Harry Potter" films, showed up last week at the Ivy League school in Providence, Rhode Island, where new students were treated to orientation activities before the official start of classes on Wednesday.

Watson was photographed looking very relaxed in jean shorts and a white T-shirt, but reports are that her introduction to academia has been less than low-key, with much excitement being stirred by her presence.

The blog Just Jared reported that while the British actress visited the campus on Friday with her mother and her boyfriend, Jay Barrymore, Twitter user @cupcakenar sent out the following tweet: "My dad made Emma Watson mad by taking a photo of her going inside the Financial Aid office at Brown. She was with her mom & boyfriend."

Celebrities furthering their education are not new, but with the advent of social networking sites, stars' every move can be tracked and reported.

When actor James Franco apparently fell asleep during a lecture at Columbia University in New York City earlier this year, a photo snapped by a classmate made the rounds online and prompted many a tweet.

Franco, who has appeared in films such as "Spiderman" and the critically acclaimed "Milk," was reported to be taking classes at Columbia and New York University while also writing a book.

Paparazzi were on high alert when Mary Kate and Ashley Olsen began attending classes at NYU in 2004.

Photos appeared constantly of the tiny twosome -- often with bodyguards in tow -- on their way to and from class after they moved from Los Angeles to New York City for school.

Stars such as Julia Stiles, who enrolled in Columbia, and Natalie Portman, who attended Harvard, have tried to be as under the radar as possible while pursuing their education.

According to a 2003 article about Portman in the university's Harvard Crimson newspaper, the "Star Wars" actress lived on campus her freshman and sophomore years while pursuing a degree in psychology.

Portman told the college publication that she was able to enjoy her time as a student, despite her celebrity status.

"At the beginning of college I was talking to people who were actors who had gone to college, and I heard awful stories about people getting 200 visitors a year knocking on their dorm room, or having awful stalker issues," Portman said. "But I've not been bothered once, and that's also thanks to the police here, who have been really wonderful."

Watson also has been quoted as saying she just wants to be treated as a regular student.

"I do hope that it will be only a short time before I am known as Emma Watson the student from the UK, rather than Emma Watson who starred in the 'Harry Potter' films," Watson said.

The "Harry Potter" actress isn't the only famous student taking her seat at an Ivy League school this year.

The paper reported that school officials complied, including having the registrar put a privacy block on Judd's file to prevent information about the actress from being made public and arranging to have Harvard police present during the program's coffee breaks.

In speaking with the Boston Globe, Brown University's director of communications Mark Nickel declined to confirm that Watson was a student there, but he did say the school might take extra precautions to protect a young wizard.

''We do whatever we need to do to ensure safety and privacy, and that applies pretty much to all students," Nickel said.