LONDON, England (CNN) -- They are some of the biggest names in Hollywood, but even Susan Sarandon, Ethan Hawke and Dustin Hoffman have had their fair share of casting calamities they would rather forget. 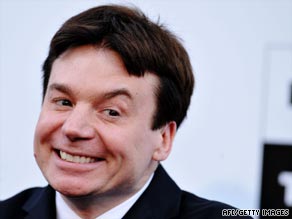 Mike Myers sabotaged some auditions for parts he didn't want. "Why not be nude even if it is a children's theatre?"

CNN's The Screening Room has managed to persuade the cream of Hollywood to confess their tales of audition woe.

The stars shudder at the memory of waiting in line, frantically trying to memorize lines handed to them moments before, all the while being assessed by critical strangers.

Benicio del Toro recounts attending 50 or 60 auditions before getting a part and Quentin Tarantino told Eli Roth he "blew it" when he first auditioned for "Inglourious Basterds." While Catherine Keener remembers a cutting personal assessment: "You're not pretty enough."

Here are some of their worst moments:

"There was one that started out terrible, which was where I had to go to a disused tax office in Harrow [near London, England] very early in the morning and put on very tight velvet flared loon pants and a pair of crocodile four-inch- heeled platform shoes, and wear a sort of very small top that didn't meet my trousers, hair extensions and I had to karaoke to 'Smoke on the Water' by Deep Purple. It's a very lonely place. And I was 45 at the time..."

Ethan Hawke
"Before Sunset," "Before the Devil Knows You're Dead"

"I have had so many bad auditions. I have fallen on my ass. I have made a complete fool of myself. I auditioned for Robert Redford once and I was so starstruck I couldn't even speak. I had a mic wire at a screen test clipped to me and then I got kind of nervous and I paced in a circle and then took a step and tripped and fell on my face. You just have to forgive yourself and keep going on."

Mike Myers
"Austin Powers: The Spy Who Shagged Me," "Shrek"

"I've had some bad auditions for some TV movies that were shooting in England where I just didn't want to be in them and offered them more obtuse [performances] ... I like to think of it as performance art. I didn't sabotage it, I was just woefully inappropriate, you know? I just thought, 'Why not be nude even if it is a children's theatre?"

"You wouldn't believe some of the comments, assessments. But, they're really not meant personally. Like for example, 'You're not pretty enough.' For them it's just a fact. But for you it's like, 'Oh my God! I have to live with this.' You get a thicker skin about it, which you should because it isn't meant personally, but it's such a personal profession that you kind of have to get used to getting critiqued on things that you shouldn't even care about."

"The most famous casting director from New York, I was lucky enough to get an audition with her in the '60s. She did all the plays, all the Broadway plays. She is sitting across the desk saying her lines, and I am saying mine, and she stops and says, 'Come here. Bring your chair here, right next to me.' And I say, 'Why?' And she says, 'Because I can't hear you, and you have never been on the stage or on Broadway, and you are going to have to reach the last row.'

I said, 'Yeah, I know. I have been studying acting for about seven years now, but I'm not on Broadway now, I'm just sitting in front of you.' So, she said, 'I know, but I couldn't hear you. That's why I asked you to sit next to me.' I said, 'Okay. Can you hear me now?' I was getting so angry. Well, at that point she said, 'Speak up,' and I screamed as loud as I could, every line after. She called my agent and said, 'If you ever send that maniac around here again I will never see another one of your clients.' I really lost it.

"I left the casting of 'Hostel: Part II,' which Quentin [Tarantino] was a producer on to go and audition for his movie ['Inglourious Basterds'] and it was just a room with a camera. He wasn't even there and I was like, 'Where's Quentin?' They go 'He didn't leave his house today.' Anyways, I blew it. I did terribly and Quentin called me and starts making fun of me. He was like,'You were so bad in your audition, but I'll give you a callback. Come on.'

"I auditioned for 'A Few Good Men' with Tom Cruise and Rob Reiner and when I went into that audition I was eight months pregnant ,so there is always kind of a lasting impression that I was playing this military officer with this gigantic belly. Obviously, it turned out well because I got the role but there was something quite odd about it."

"I remember auditioning for one play, and the girl was awfully short and we were holding the book in our hands and I almost couldn't see her. I knew I wasn't going to get that part, I tried to make myself smaller and smaller so I could be closer her size and that didn't happen."

Ramon Rodriguez
"Transformers: Revenge of the Fallen, "The Taking of Pelham 1 2 3"

"I met ['Transformers' director] Michael Bay in his office in Santa Monica for an hour and a half he had me running, jumping and diving all over his office and his furniture freaking out like I was reacting to robots, which is the strangest audition I have had by far. I left the room completely drenched in sweat and all I could say was, 'I better get this part.' It worked out and the stuff we did in the room was the stuff we did on set."