George Hamilton puts his life out in the open 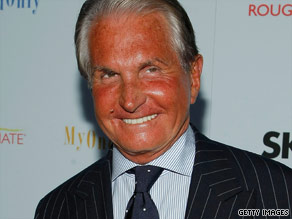 George Hamilton gets his life story on screen in "My One and Only."

With the elegant suit and tie, the impeccable grooming, the tan (Did I mention the tan?), George Hamilton is still a charmer, and he comes across like a born bon vivant.

Sure, his acting may have taken a backseat to his bronzed visage years ago, but what did happen to him years ago? Well, there's a story there, one now coming to the big screen. Hamilton's formative years are loosely depicted in the film "My One and Only," opening in wide release September 4.

"My One and Only" has the style of a film produced during Hollywood's golden age, but the tale is easily relatable to today. In the film, Hamilton's mother, Anne, played by Academy Award winner Renee Zellweger, walks in on her bandleader husband and another woman. She hits the road in a brand new Cadillac Coupe de Ville with her two sons, George and Robbie, en route to find a new husband and a new life.

Watch a preview of 'My One and Only' »

Hamilton, 70, spoke with CNN about the film, old Hollywood and his mother. The following is an edited version of the interview.

CNN: There is a lot of heartache in this story. Why did you want to share it?

George Hamilton: I don't know that I really did want to share it. It's a fictional story based on a real story loosely about me. And I went to the movie to hate it.

And I looked at the movie and I thought, my God, [Zellweger] looks nothing like my mother, but she was able to portray the emotions just the way it was then. I couldn't speak. I was completely overwhelmed by what Renee did. That's a great actress.

CNN: Do you think that your mother shaped your life more than your father?

Hamilton: I think they're kind of like sand and a rock, kind of -- you keep rubbing up against them and they form you.

I knew that I was the man of the family from the time I was 10, 12 -- you know, I had to be. But I knew I had to get away from it. So I signed onto military school. Then my mother said, if you're bad I'm sending you to your father, and I said, send me. I ... lived a whole year with my father -- I got to know him, I got to understand the two sides to the story. My mother didn't say bad things about him. I presumed that he was this foreign person who left and abandoned us. He didn't at all.

And when I made it in Hollywood and I didn't want to be an actor, there they arrived. It was their triumph, not mine. I wanted to be a doctor.

CNN: Now in hindsight, do you understand what your mom was doing?

Hamilton: That's a very good question. No, I didn't, I didn't get her. What I knew was I would work -- I was ... with people who had millions of dollars, and they just accepted me, and I would go out and buy a tuxedo in the thrift shop, and go to the coming-out party of a very wealthy socialite, and they would say oh, now chic. You wore your grandfather's or your father's tuxedo. And I had bought it for $5.

And I realized there was a whole reverse way of acting, and people just presumed you were old money, and I played that. That was my game. But when I looked at my mother I realized that she was born almost like a child, with the theory that we would be divinely supported. Always trust that, don't be afraid. Poverty, or [being] poor, is a mentality, it's like fog, it's all around you. My mother was broke, but that's just a temporary deal -- that's a bad hand in the poker game, if you're gonna sit through two more you can win. And that's how I looked at it.

Hamilton: Well, it was mythological. It was a place [that] the first day, I saw Robert Mitchum sitting at a table and he looked at me and said, "I know they say I don't know my lines. It's not true. I'm just too drunk to say them." And I thought, oh, that's an interesting man. Next Fred Astaire walks by, "Hello," and I stopped: "Hello, Mr. Astaire" -- God I love that guy -- and I see Cary Grant sitting down. And he said, "You've got a nice suntan. Do you like the sun?" I said "Well, yeah, I love the sun." ... He was so incredible.

And I saw Gary Cooper, Ty Power, Clark Gable, and then they disappeared. You talk about "Gone With the Wind," Hollywood disappeared! And I had envisioned this because I was the last of the contract players, and I wanted to be like them, but they were gone!

And all the sudden I'm seeing Marlon Brandos, and Monty Clifts, and then a whole generation of soft young men, the Beat Generation or whatever. I couldn't relate to them then. Because I had related to what my mother and brother had seen years before. And that's all I ever wanted to be.

CNN: There can never be another old Hollywood.

Hamilton: No, but there can be older people in Hollywood, and that's where I am now. Just before death they turn you into an icon. And the other day I got a star on Hollywood Boulevard and I thought, God this is pretty good, and then it scared me because I thought, they give these things to you before it's all over.

CNN: And did you learn to love acting?

Hamilton: Acting has always been something for me that's been a romp. I just show up and I have a good time, and I hope that I get through the day and I can have lunch in the sun. I used to take the script and if it was heavy I'd give it to George Peppard and if it was nice and light, if it was a western, a few words, I'd take it.

That's the way I looked at it. I wasn't a great actor, it wasn't my style. I just loved being an actor.