LOS ANGELES, California (CNN) -- The film about Michael Jackson's final three months, which uses video of rehearsals for his concert comeback, will run in theaters worldwide for two weeks only beginning October 28, according to Sony Pictures. 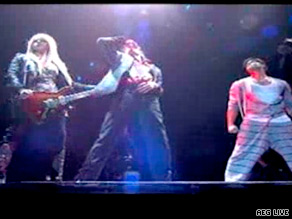 Footage from Michael Jackson's rehearsals for 50 London shows will be used in "This Is It."

Tickets for "Michael Jackson: This Is it" go on sale Sunday, September 27, Sony said in a news release Thursday.

"As we began assembling the footage for the motion picture, we realized we captured something extraordinary, unique and very special," Ortega said. "It's a very private, exclusive look into a creative genius' world."

Ortega said "This Is It" "may go down as the greatest concert that no one got a chance to see," since the pop singer died three weeks before it was to debut in the O2 Arena in London, England. "But with this film, we get a rare portrait of Michael as he prepares for his final curtain call and what I believe was going to be his master work."

Sony began editing the film last week after concert promoter AEG Live handed over about 100 hours of video it shot during April, May and June 2009.

The initial release date was set for October 30, but Sony said it decided the "special, limited, two-week engagement worldwide" would be moved up two days.

A Los Angeles Superior Court judge approved the deal last week to allow the special administrators of Jackson's estate to sign a contract with Sony and AEG Live to allow the production.

The judge has yet to decide on a deal that would allow AEG Live to conduct a three-city tour of a Michael Jackson memorabilia exhibition to coincide with the film's release.