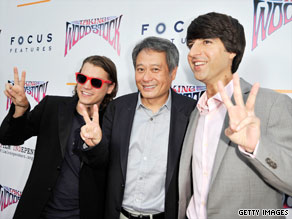 "Taking Woodstock," which is out August 28, features performers who were either not born or very young when the monumental festival occurred in 1969, but many were enticed to join the movie because of Lee's involvement.

"I'd read the Sunday paper for Ang Lee. I'd do anything. He's a filmmaker I've always admired and [was] sort of eager to work with," said Liev Schreiber, who plays a transvestite. "So when he approached me, you know: Dress, shmess, I'll do whatever you want."

Lee's work, which includes the renowned films "Crouching Tiger, Hidden Dragon" and "Brokeback Mountain," has garnered him three Oscar nominations. The lighthearted "Taking Woodstock" is a mild departure for a man whose films tend toward serious drama.

The film's plot concerns Elliot Tiber (Demetri Martin), son of the owners of a fading Catskills hotel, who helped attract the Woodstock festival to the area. It's based on Tiber's memoir.

The 36-year-old Martin, who is best known for his standup, his contributions to "The Daily Show" and hosting "Important Things with Demetri Martin," might have benefited the most from working with Lee. "Taking Woodstock" is his first film as star, and he's made only a handful of others.

"Ang is not really going to hold your hand and reassure you through the whole thing. He's going to be more like a sensei, kind of a tough-love thing," Martin said. "He's like, 'Punch this wall,' and you'll be like, 'Why?' and he's like, 'Punch the wall, and do it.'

"And then it's like, 'Oh, good performance, great. I'm glad I punched the wall,' and you don't understand, but it's really a lesson in trust," he added.

Jonathan Groff also came to "Taking Woodstock" with limited big-screen experience and was excited to work with Lee.

"He's your fearless leader. He's everything that you want to be when you grow up," Groff said.

Woodstock may have been 40 years ago, but it's recent enough that a number of the principals are still alive.

Groff had the opportunity to meet Woodstock co-founder Michael Lang, whom he plays in the movie. Lang opened his memories to Groff and also visited the set.

"He came to the first day on set, and that was a little nerve-wracking, but it then became comforting because as we would be between takes he would, you know, be giving you a little thumbs-up," Groff recalled. "I'm sure it must have been a little out-of-body. I mean, I can't imagine watching someone playing me in a movie, from 40 years earlier."

Although there haven't been similar watershed events since, Schreiber and Groff said that the most similar event could be the 2008 election campaign, during which many young people rallied behind Barack Obama.

"Well, I gotta say that there is an air of optimism and potential in the election of Barack Obama," Schreiber said. "I certainly feel a return to that sense of optimism and patriotism that I think people felt at perhaps the election of Kennedy and the beginning of the civil right's movement in America and the sexual revolution. ... It did feel somewhat timely."

The movie also tested Hirsch's and Schreiber personal boundaries: In addition to Schreiber's dress, Hirsch was naked for one scene.

"It wasn't just photographed. I was filmed!" Hirsch said. "What was fun about it is it was kind of like this liberating [situation], but that's what Woodstock was."

As for Schreiber, when his children saw him in a dress, they were "terrified," and his partner, actress Naomi Watts, was "pretty mortified."

"I think that was sort of the point. I think the message is one of acceptance," Schreiber said.

Scaring the kids is one thing, but what about wearing the dress on the set in front of the cast and crew?

"It was exhilaratingly humiliating," Schreiber said. "I think that's generally how men feel when they put on dresses. That's why they do it so often."

All About Woodstock • Ang Lee