Coppola's wife: 'Apocalypse Now' was 'out of control' 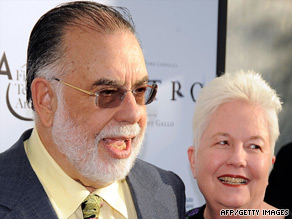 Eleanor Coppola with husband Francis. They have been married for 47 years.

It was on the set of splatter flick "Dementia 13" -- she was the shy set decorator; he was the ambitious rookie director. They began dating and three months later she became pregnant and the couple married.

That was 47 years ago and since then the retiring artist has become something of a chronicler of the extraordinary Coppola family, which includes her flamboyant Oscar-winning husband, daughter, Sophia and actors Nicolas Cage and Jason Schwartzman.

Life with Francis has also allowed her a ringside seat during the making of some of the most revered films in cinematic history.

Most famously, she was in the Philippines in 1976 during the notoriously difficult production of "Apocalypse Now," the war epic that almost destroyed Francis' blossoming career.

Her little camera captured revealing footage of her husband as he and his actors and crew unraveled psychologically, much like the characters in the film. The footage was subsequently immortalized in the documentary "Hearts of Darkness: A Filmmaker's Apocalypse."

Here Eleanor Coppola talks exclusively to CNN about her pride at seeing Sophia win an Oscar, what Francis is really like and just how close "Apocalypse Now" came to disaster.

The Screening Room: Is Francis different on set than at home?

Eleanor Coppola: No. I think because he spent his life as a director it's just in his nature. It's in his blood. He is always directing. So, when he gets home he's directing the dinner, where we are gonna sit, what we are going to eat. I've adjusted to it, so now it's really funny.

TSR: What does Francis enjoy most in life?

TSR: Do his films mirror life?

EC: Definitely the ones he has written; the original pieces resonate with his life and aspects that reflect the way his life has evolved. He does address the issues -- both the positive and the darker side too. I think "The Godfather" was a raw example of his experience at weddings, with family, and he just took his experiences and viewed those characters with the familiar aspects that he had known.

TSR: What was Francis' inspiration for "Apocalypse Now?"

EC: After making "The Godfather," "The Godfather: Part II" and "The Conversation," in which he felt like so many of the scenes he was shooting were inside these dark rooms and were about the complex relationship between the characters, he had the idea that he was going to go out to the Philippines on location and make this big shoot about the green landscape and everybody was going to be out in the sun -- light, expansive, exciting. Just a fun, big war film.

But once he got out there, he found that he got delving into the research for the material -- he realized this was no lightweight thing. This was a war and people lost their children, sons, husbands. He realized it had more serious themes and considerations and it took him deeper and deeper into himself, the issues of life and death and all the heavy questions of war an epic brings to life.

TSR: How did "Apocalypse Now" affect Francis' state of mind?

The script was evolving and the scenes were changing -- it just got larger and more complex. And little by little he got out there as far as his characters. That wasn't the intention at all at the beginning.

TSR: Tell me about how the documentary you shot while Francis was making "Apocalypse Now" came about.

EC: I never intended to make the documentary of all documentaries. I was just trying to keep myself occupied with something to do because we were out there for so long. I just had never shot a documentary before. They wanted five minutes for a TV promotional or something and I thought sooner of later I could get five minutes of film and then it went on to 15 minutes. I just kept shooting but I had no idea ... the evolution of myself that I saw with my camera. So, it was a surprise for both of us and a life changing experience.

TSR: In what way was it a life-changing experience?

EC: When you do something that's the most extreme and hardest thing you have ever done -- everything is in jeopardy; your personal life, your financial life is in jeopardy and people's lives were literally in jeopardy. Two people lost their lives in that production, in the course of building. It involved 700 people to build the temple and there was an accident. So, it was a powerful experience and I think we came back in a new place. When you stretch yourself that far, you are able to come back in a deeper more thoughtful way.

TSR: Francis is known to fight for his actors, like when he insisted on having young unknown Al Pacino in "The Godfather" against the studio's wishes

EC: I think his vision is extremely clear. That is just the way his life is. So, when someone says you can't have the green chair on this set, that isn't acceptable to him. He just doesn't see it that way. It is the way his vision perceives it and there aren't any alternatives. So, if people say "no" to him, he just brushes that aside and he pays no attention.

TSR: What's it like to watch your children, Roman and Sophia who are both film directors on set?

EC: It has been deeply satisfying for them to find their way and find their voice, I think particularly for Sophia. I shot a documentary for "The Virgin Suicides" and then also "Marie Antoinette," so I was there seeing her blossom and emerge.

TSR: What was it like seeing Sophia win an Oscar for Best Original Screenplay for "Lost in Translation" in 2004?

EC: Well, I was deeply thrilled, particularly because she's a woman and I thought it was so touching that the children actually do reflect their parents and their upbringing and their parents' abilities do seem to have been passed on to their children. It was very emotional moment to see her. Especially because Francis won a screenplay Oscar at the same age, both 32, so that was a touching circle of life.