For some fans, lessons of 'Potter' carry over into real world

(CNN) -- In "Harry Potter and the Order of the Phoenix," the threat from villainous Lord Voldemort is ignored until it's almost too late. 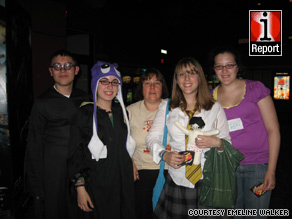 Some Potter fans, under the leadership of Slack, have come together to bring the spirit of "Dumbledore's army" to life. Slack is the executive director of the Harry Potter Alliance, a nonprofit organization dedicated to engaging Potter fans in social activism.

Slack's group has taken on many issues over the past few years. "Because we're basing it on a modern myth, you can point to many issues at once," he said.

In the "Potter" books, "implications toward public policy are profound," Slack said.

Slack, a former sketch comedian with an interest in building social movements, came up with the idea in 2005 after reading Potter books to children at a Boys and Girls Club, something he said transformed him.

"I saw that the books weren't just empowering personally," he said. "I think the books speak to something that is very unique, because ["Potter" author] J.K. Rowling has been able to express a story about the importance of love."

Slack founded the group with his friends Paul and Joe DeGeorge, members of a "wizard rock" band called "Harry and the Potters," as well as comedian Seth Reibstein and music therapist Sarah Newberry.

Slack sees parallels between the magic in the "Potter" books and expanding one's mind to come up with solutions in a creative way. One of his mottos is "Don't ignore the magic of being alive."

One of the group's projects has been to gather thousands of signatures for petitions in protest of the war in Darfur.

The alliance also helped hundreds to register to vote last year, according to Slack. Earlier this year, the Harry Potter Alliance conducted a book drive for children around the world, an effort led by "Potter" actress Evanna Lynch.

Slack said they raised over 13,000 books, 4,000 of which went to youths in Rwanda who were very young at the time of the Rwandan genocide.

This has led to the group's "What Would Dumbledore Do?" campaign.

The campaign takes Dumbledore's ethics and beliefs and translates them to the real world. For the midnight screenings of "Harry Potter and the Half-Blood Prince," members were encouraged to wear buttons mentioning lessons that Dumbledore taught them.

When iReporters were offered the opportunity to ask a question of President Obama, Slack knew exactly what he wanted to ask about: Darfur. Slack thinks Obama's approach so far is "more than a disappointment. ...There's a great deal of hope for Darfur, if President Obama can move on that."

Rowling herself has praised the Harry Potter Alliance, one of Slack's proudest moments.

"It's incredible, it's humbling, and it's uplifting to see people going out there and doing that in the name of your character," she told Time magazine in 2007. "What did my books preach against throughout? Bigotry, violence, struggles for power, no matter what. All of these things are happening in Darfur. So they really couldn't have chosen a better cause."

Rowling has also written personally to Slack about his efforts.

Science fiction and fantasy aficionados have translated their fandom into real-world action for years. Recent examples: "Star Wars" fans put on a charity auction to benefit victims of the brushfires in Australia, and comic book fans such as "Crimson Fist" donned superhero costumes to help the needy.

Christopher "b!x" Frakonis came up with the idea of screening the sci-fi movie "Serenity" for charity as a way of keeping it on the big screen in 2006.

This year, 52 such "Can't Stop the Serenity" screenings are taking place around the world for charities such as the human rights organization Equality Now!, in response to a challenge by the film's director Joss Whedon.

Members of the Harry Potter Alliance, 4,500 of whom make up the most hardcore group, are inspired by what it has done.

"I know I would have loved to have had a group like this when I was a child or teenager, to support me and show that anything is possible if you put your mind to it," said 29-year-old Amanda Bolton, from Calgary, Alberta.

Bolton first learned about the group when it was mentioned on a fan podcast. She was intrigued by the similarities between the plot of the books and its application to real life as well. In the books, "muggle-borns and other intelligent nonhumans are discriminated against, treated like scum and forbidden from having equal rights," she said, adding that love was the main weapon used against the forces of evil.

Like Slack, Bolton condemns the "Muggle mindset," what members call an ignorance of or refusal to act on the important issues facing the world.

Some bloggers have criticized the group for taking their fandom too far or using young fans' love of Harry Potter to promote an agenda.

Slack denies that he has a partisan agenda. "I sort of took it as a compliment," he explained. At the same time, he hopes that at least some of their causes, such as promoting literacy, are things that all can agree on.

Alliance member Bobby Lang says that some within the group have occasionally raised questions about some of their projects. "There have been some interesting debates over whether or not Dumbledore would be an activist," he said, mentioning that some see Dumbledore as "teaching through living." Lang adds that such debates usually don't get too heated, since "we're all Harry Potter fans, we all have that in common."

Noth Lang and Bolton say they are more knowledgeable about world affairs because of the organization's connection to Harry Potter than they would be otherwise.

"There are issues I didn't know much about or hadn't thought about too deeply that I'm now involved in, like Darfur," Bolton said. "It has introduced me to new issues and new ideas."