(CNN) -- It's been eight years since Daniel Radcliffe, Emma Watson and Rupert Grint first hopped on the Hogwarts Express, and the three have done little else since. 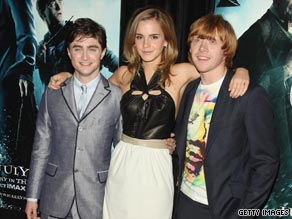 Now that the ride will soon come to an end, the cast is trying to fathom a life without the Harry Potter films -- an understandable difficulty, considering that they've grown up along with their characters.

The other item showing its age is the storyline of the sixth installment, "Harry Potter and the Half-Blood Prince." Part humor and part horror with a healthy dose of hormones, "Half-Blood Prince" is clearly more attuned for an audience who, like the cast, are no longer in grade school.

"On the one hand, we have all this light romance and snogging, and on the other hand, people are getting killed, and bridges are being blown up," director David Yates said.

Heavy stuff, certainly, but it's a challenge on par with the stars' blossoming careers.

Hear, see and read how the characters have grown »

One can only imagine that by now, the Potter series feels like home to Daniel Radcliffe, who landed the title role at 11 after playing supporting roles in the BBC's "David Copperfield" and the 2001 film "The Tailor of Panama."

"[Without it], to be honest, I don't know what I would've done," said Radcliffe, who turns 20 on July 23. "I had 'Copperfield,' but at that point I wasn't even dreaming about [acting] being a career then."

Since then, Radcliffe has grown into international stardom, reportedly earning $25 million per Potter film. Indeed, the actor has gotten raves away from the movie theater: In London and on Broadway, Radcliffe took on the role of Alan Strang, the mentally disturbed stable boy in Peter Shaffer's "Equus," which required him to strip naked in the play's final scene.

Radcliffe has also taken on roles in "December Boys" and the TV movie "My Boy Jack," and he is eager to keep at it long after the Potter series wraps.

So what about directing, then? Only time will tell, Radcliffe said.

"For now, I want to keep acting," the actor said. "I don't think I know enough about the technical sides yet to even consider directing. It would be something that I'm interested in, but it would be a long, long way off."

As for Watson, when she's not occupied with filming, she can be found in the pages of fashion magazines -- including the advertisements.

Having landed covers for both Teen Vogue and the UK version of Elle within the past few months, it's no wonder that the 19-year-old was chosen to be the face of Burberry's autumn line. Going from tween wizard to fashion icon is quite a leap, but it's one that appears to fit Watson well; how many other Hogwarts students can count Karl Lagerfeld among their friends?

Like her co-star Rupert Grint (Ron), Watson didn't have any acting experience when she auditioned for "Harry Potter and the Sorcerer's Stone" at age 9. She managed to beat out thousands of other girls for the role of Hermione, a part she's said was "life or death" for her.

Now that the series is close to its end, the actress is eager to try new things.

"I would've told myself not to take it so seriously and to try to have as much fun as you can," Watson said she would've advised her younger self.

But similar to her Potter character, Hermione, Watson is eager to hit the books after the series concludes. The actress confirmed that she plans to start college in the United States this fall.

For Grint, the future is a bit more unclear.

"I don't know what I'm going to be doing, really," the actor told the Los Angeles Times. "I'm going to miss it, I think, because I've been doing this my whole life."

Despite his start as an unknown -- Grint reportedly submitted hip-hop lyrics describing his character to snag the part of Ron Weasley -- he's arguably been the most adventurous of his co-stars, having played opposite Paul Giamatti in the 2002 family comedy "Thunderpants" and starring in 2009's sexually charged thriller "Cherrybomb."

His third film outside the Potter series will be the indie "Wild Target," co-starring another British sensation, Emily Blunt. iReport.com: Share your reviews of the latest "Potter"

Whatever their plans, all three have a few years to go before they hang up their magic wands; the last installment of "Harry Potter" is being filmed in two parts, and the final film won't premiere until 2011.

And, Radcliffe said, they've helped each other cope with fame over the years.

He said that on the red carpet, "[the fans are] cheering for a kind of person they see in newspapers and in interviews and in films, and that's a different person to you. You have to keep that -- that persona -- and the person you actually are as separate as you possibly can, and then you will avoid becoming arrogant."

Which is why it helps to have two people who know you well, on set and off.

"I think we've all kept each other pretty level-headed over the years," Radcliffe said.

CNN's Doug Ganley and Neil Curry contributed to this story.

All About Harry Potter