(CNN) -- "Transformers: Revenge of the Fallen" -- the most terrible revenge since Montezuma's -- is louder, longer and lamer than the 2007 hit it succeeds. 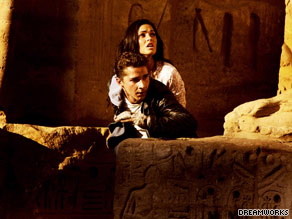 Both Shia LaBeouf and Megan Fox run away a lot in new "Transformers" -- she in slow motion, says Tom Charity.

Which is saying a lot.

Long story short: The Decepticons are back, fixed on destroying Sam (Shia LaBeouf), Optimus Prime and the Earth, in that order.

Produced by Hasbro -- the accompanying trailer for "G.I. Joe: The Rise of Cobra" suggests that the company's not-exactly-subtle strategy is to mass market war toys for boys -- "Transformers: Revenge of the Fallen" is a grotesque exercise in hyperinflation. At 149 minutes, it's longer than "2001," "Close Encounters of the Third Kind" or "Star Wars." In fact, this may be the emptiest epic ever made.

Director Michael Bay is famous for blowing things up, but you could invade a small country with less firepower than he expends on this extended-length commercial.

For all his sound and fury, Bay isn't much of an action director. There's no rhythm in his slam-bang cutting, no discipline in his orientation, and there's so little to distinguish an Autobot (the good Transformers) from a Decepticon (the bad) that at any given moment, it's a toss-up who is pulverizing who.

A guide to the Transformers »

Combat scenes are a bewildering blur of crunching metal. On top of that, the humans are essentially bystanders and onlookers here, so that LaBeouf's primary contribution to the fighting is to run away, duck and cover. It's the same deal for Megan Fox, only in lingering slow motion.

Watch the Transformers do their thing »

The Defense Department does get the opportunity to show off its hardware, even if most of the missile strikes fall wide of the mark -- probably because there aren't enough Decepticons to sustain heavy losses. If he ever needs another job, Bay should consider a move into arms procurement.

At least the nonstop carnage is on a scale to satisfy the demolition derby crowd, down to destroying one of the Seven Wonders of the World. The effects work is mostly rock-solid, and the Transformers themselves have a chromatic showroom gleam. As a kind of 21st-century Mechano movie, it could have hit the right buttons.

It's not the extravagant fireworks display that rankles, it's everything else: the dull and pompous exposition, the trite characterizations, the tacky love story, the dismal comic relief and incongruous pretensions to the status of a popcorn epic.

None of these things is funny. Not in this movie, anyway.

The truth is, Bay is a rotten fit for this assignment; he's much too self-important to recalibrate his approach for the younger audience this material demands.

Memo to Michael: It's a toy movie. Your audience is predominantly teen and pre-teen. My kids don't need to see your salivating soft-porn fantasies or your reactionary militaristic politics.

Most of all, none of us needs to sit through 2½ hours of this inane and mind-numbing movie. Better it should be melted down for scrap.

All About Michael Bay