(Entertainment Weekly) -- Sandra Bullock will surely be popping open the champagne as her new romantic comedy, "The Proposal," accepted the top spot at the box office this weekend by grossing $34.1 million, according to early estimates by Hollywood.com Box Office. 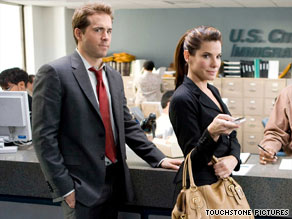 Not only did "The Proposal" win the weekend, but it was by far the best opening of Bullock's career, nearly doubling the opening of her previous best, "Premonition," which debuted to $17.6 million in 2007.

While "The Proposal's" success was fueled mostly by women (73 percent of the audience was female), both women and men gave it a healthy "A-" CinemaScore rating, so expect the movie to hold up fairly well during the next few weeks.

The weekend's other big release, the prehistoric buddy comedy "Year One," landed in fourth place with $20.2 million -- an okay debut for the $60 million movie. However, all indicators point to a quick descent for the Jack Black/Michael Cera flick.

"Year One" dropped 24 percent from Friday to Saturday (never a reassuring sign), and the movie received an unimpressive "B-" rating from CinemaScore.

"Year One" is all but certain to join "Land of the Lost" as another box-office disappointment for high-concept comedies.

"Up" now stands at $224 million, and may levitate past "Star Trek" (currently at $239 million) to become the year's highest-grossing film.

Finishing off the top five was "The Taking of Pelham 1 2 3," which fell an alarming 52 percent for an $11.3 million weekend stash. Also opening this weekend was Woody Allen's "Whatever Works," starring Larry David. The New York-based comedy laughed up $281,000 from just nine theaters for a weekend-leading $31,000 gross per theater. The film will expand to more than 300 theaters on July 3.

Overall, the box office was up 3 percent compared to last year's Father's Day weekend, when "Get Smart" debuted to a surprisingly sharp $38.7 million. Hope you all are having a splendid Father's Day! I know I will -- I'm taking my pop to see "Up."