Cast of new Allen film goes with 'Whatever Works'

LOS ANGELES, California (CNN) -- Actress Patricia Clarkson has a giggle whenever she thinks about the handwritten letter she received from the great Woody Allen. 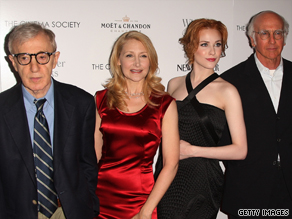 The actress, who first worked with the famed director on the 2008 film "Vicky Cristina Barcelona," was tickled by a letter on Allen's personal stationery in which he said he had written a part for her, "but if you have something better to do, I'll understand."

"You know, he had me at the letter," Clarkson said. "It's Woody Allen! 'If you have something better to do'? Woody, come on!"

Clarkson definitely made time to perform in Allen's latest film, "Whatever Works." The movie centers on a quirky, grouchy New Yorker -- played by the aptly cast Larry David -- who abandons his privileged life to become more Bohemian and hooks up with a younger woman played by Evan Rachel Wood.

David said he was slightly hesitant about embracing a role as large as that of Boris Yellnikoff in "Whatever Works."

Watch David talk about Allen encouraging him to "stretch" »

David said Allen convinced him that he could pull it off. He said he enjoyed his time acting for the iconic director who, he said, was great to work with and allowed his actors freedom.

"If you're not comfortable with something, he doesn't want you to do it," David said. "He doesn't mind if you change his words -- he's very easy. It was very easy to work with him."

It wasn't as easy to work with Clarkson, David said, because she is such an amazing talent.

"You forget that you're in the movie because you're just enjoying what she's doing," David said. "Then all of a sudden it dawns on you, 'Oh, hey, I've got a line coming up, I better get back to this movie.' "

She echoed David's admiration and said working with the comedian in an Allen-helmed film was incredible.

The movie marks Wood's debut in a comedy, and like David, she found the experience a bit daunting at first.

"Not only am I doing Woody Allen dialogue, but opposite Larry," she said. "Thank God he was just as nervous as I was, because he does 'Curb,' but that's mainly improv, so he never had to really memorize lines before."

Her character Melody, Wood said, isn't exactly dumb, but she is earnest.

And even though Wood grew up in North Carolina, she said Allen encouraged her to tap even further into her roots for the role.

"Woody always told me, 'More Southern, more Southern,' " she said. "I was so worried about going over the top, and he really pushed me. I'm glad he did."

Although some of the characters hail from below the Mason-Dixon line, "Whatever Works" was shot in the mainstay setting of most of Allen's films, New York City.

Clarkson, who was born in New Orleans but lives in New York, said she marvels at how the director is able to attack similar themes like love, romance and the life of New York intellectuals while still keeping his films fresh.

"And yet, I don't know how he does it," Clarkson said. "And for me, this character, he takes this kind of archetypal Southern character, and he's such a Yankee, yet he figures out this beautiful way to come at this character fresh, which is almost impossible, and he did it."