What happened to movies made for grown-ups?

(Entertainment Weekly) -- Give Robert Downey Jr. a glass of scotch and a suit made of metal, and lines will form around the block. But cast him as a newspaper columnist who befriends a cello-playing homeless man, and these days the only crowds gathering will be for the movie playing next door. 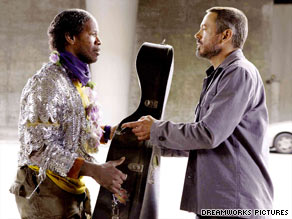 "The Soloist," a drama starring Jamie Foxx and Robert Downey Jr., did poorly at the box office.

The latter Downey project, a onetime best picture hopeful called "The Soloist," cost $50 million to produce and has grossed just $30 million. Reviews were less than rapturous, but producer Gary Foster thinks there was something deeper at play.

"Audiences don't want to be reminded of the darkness in the world," he says. "They want to laugh, get taken to space, watch things in a museum come to life."

But what if your idea of entertainment involves more than watching Ben Stiller get slapped by monkeys? The pickings are slim and getting slimmer.

In the wake of high-profile dramas flopping at the box office -- including "Frost/Nixon," "Australia," "Revolutionary Road," and "State of Play" -- studios are increasingly gun-shy about making movies that don't offer pure escapism. Even the frothy, adult-oriented caper "Duplicity" struggled to find a wide audience.

One producer who specializes in dramas says the climate is as brutal as he's ever seen it: "Anything that can't be sold as a genre film or wasn't conceived as a franchise is dead."

Even projects that might once have been considered Oscar bait have fallen prey to executives' squeamishness. Paramount turned down director Bill Condon's planned biopic about Richard Pryor, with Eddie Murphy attached to star. Universal axed a drama starring Naomi Watts about a global activist.

"With the economy being what it is, no one wants to get blamed for a failure," says one agent. "If you greenlight something that's [totally mainstream] and it fails, it's not your fault. If you greenlight an adult drama and it tanks, you lose your job."

Who's to blame for the sorry state of the adult drama?

Filmmakers fault studio marketers for not effectively selling serious fare. Producers blame the studios for making poor choices and spending too much money, setting dramas up for failure. Meanwhile, some executives say the films themselves simply aren't compelling enough.

"Frankly, a lot of the dramas just aren't as good as they purport to be," says one studio exec. To break through these days, a dramatic film needs to have more than simply an Oscar winner or two and a worthwhile tale to tell. "The adult drama today has to be more than, say, a meditation on alcoholism," says Roberto Orci, co-writer and executive producer of "Star Trek," who's trying to get his own drama, 28th Amendment, off the ground at Warner Bros. "You have to tell that story in a new way."

It also helps if you can give your drama the commercial hook of a genre film -- like last year's hit "Gran Torino," a meditation on tolerance wrapped in the guise of a movie with a gun-toting Clint Eastwood and a cool car.

"That movie worked because you could put a 30-second spot together where people said, 'Oh, that sounds kick-ass,' " says Foster.

Universal seems to be following a similar playbook for its July release "Public Enemies." The studio's great, heart-thumping trailer suggests an action movie more than a character-driven historical drama. Likewise, judging from the pulse-pounding ads for The Weinstein Company's post-apocalyptic drama "The Road," you'd think the film was "The Road Warrior," not a somber tale of societal breakdown.

As bleak as things look for the adult drama, many believe the genre is simply in the midst of a cyclical downturn, and that it will eventually make a comeback.

"People are turned off to stuff that's holding a mirror up to their lives," says one prominent producer. "But that will all change when we return to a more solid economic footing."

Producer Mark Johnson ("The Notebook") agrees. "You have to have faith in a mature audience," he says. "The strike zone may be getting smaller and smaller, but if you throw it right, it can still work."