Pixar's secrets on display in 'Up' 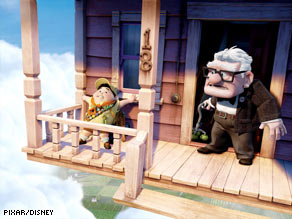 A boy tags along with an old man and his traveling house in the new Pixar movie, "Up."

Including its first feature, "Toy Story," in 1995, the animation powerhouse Pixar has released nine full-length films. All nine have been both financial and critical successes.

There has to be a secret, right?

Uh, no, says Pete Docter, the director of Pixar's 10th feature, "Up," which opens Friday.

"I don't really think it's much of a secret," he told CNN. "I think it comes down to two basic things: one is that we're run by artists. ... John Lasseter is a film director, as opposed to being from a business school or whatever. He has that side of him as well, but he's always approaching these things as the same way we are.

"Second, we have some pretty great people that they've managed to collect here. This is our 10th film, and every film has just gotten better and better, whether that be in animation or special effects or lighting. And it just all comes together to make for some really fantastic stuff."

Watch a preview of the film »

And though there are occasional pop-cultural references, such as those favored by Pixar's competition, in general the humor is organic to the story. And story always comes first, says "Up" producer Jonas Rivera.

"One of the things that I really love about [Pixar] is that no matter what you do, if you're a production assistant or a producer or a marketing executive or running the kitchen, everyone here thinks like filmmakers," he said. "Up" took five years to create, Rivera said, and his biggest fear was "it's not gonna stay true" to the original concept.

In the case of "Up," the story involves the elderly Carl Fredricksen, voiced by Ed Asner, who had a happy marriage and a career as a balloon seller for many years. After his wife dies and he's threatened with eviction, Fredricksen decides to fly his house -- using hundreds of balloons -- to South America, a place that always had romantic meaning for him and his wife.

Much to Fredricksen's initial chagrin, however, he has a stowaway, a Junior Wilderness Explorer named Russell (voiced by Jordan Nagai). The two are forced to become mutually dependent in the course of their adventures.

The film has a number of gorgeous set pieces -- the house flying away, the wonder of a dramatic waterfall (the latter inspired by an episode of the documentary series "The Living Edens," said Rivera) -- but what was most challenging was an early sequence in which 50 years of Carl's life is compressed into four minutes, said Docter, the director.

"We wrote like 20 minutes' worth of stuff and kept cutting away, cutting away until we got just down to the essence," he said, praising story artist Ronnie del Carmen's storyboard work. "I was just hoping we wouldn't ruin it, because there's just such a beautiful quality of the way he draws. As it turns out, I think everybody just stepped up."

Asner -- as amusingly crusty in person as he is on screen -- praised that scene as "a grabber" but said he also loved the film's "small moments," in his words, including scenes of Fredricksen's solitary house surrounded by bulldozed space and Russell sitting on a log in front of a campfire.

He said he's prouder, though, of the film's message.

"It's a very gratifying film for me to put under my belt because of the philosophy inherent in it," he said. "Do no harm. Do good when you can. Live life. Don't live in the past. Find the future and react to the love that's given you."

"Up," which premiered at Europe's prestigious Cannes Film Festival, faces a crowded marketplace, with "Star Trek," the new "Night at the Museum" and "Terminator Salvation" all staking a claim on audience loyalties.

But the toughest critics might be at Pixar itself. After all, four of the studio's films have won the Oscar for best animated feature. All but two have earned more than $200 million at the domestic box office. And every single one has been praised by critics -- a handful, such as 2007's "Ratatouille," receiving almost unanimous acclaim. iReport.com: Did Disney's latest leave you in an 'Up'beat mood? Share your review

It's a tough act to follow. But that's where the studio really may have a secret weapon, Docter said.

Rivera added, "The bar raises, and we're all very self-competitive but at the same time supportive. Like, I didn't work on 'WALL-E,' but I feel like it's mine, you know? And I want that to look great and be great. And then I want that bar to be higher and for us to be challenged."