(CNN) -- Woody Allen's lawsuit against American Apparel for unauthorized use of his image on billboards ended Monday with a $5 million settlement to be paid to the actor-director by the clothing company. 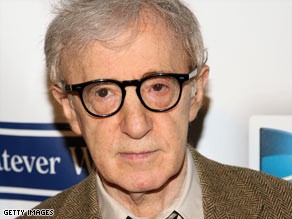 Allen said the case should discourage advertisers from using celebrities' images without permission, but American Apparel's head said he still thinks his company had a good defense.

The settlement, announced just moments before jury selection was to begin in New York, interrupted a trial that lawyers had hinted could include a parade of witnesses testifying about Allen's sex scandals.

"Threats and press leaks by American Apparel designed to smear me did not work, and a scheme to call a long list of witnesses who had nothing to do with the case was disallowed by the court," Allen said. "I hope this very large settlement will discourage American Apparel and others from doing this type of thing to myself or others in the future."

Dov Charney, founder and CEO of American Apparel, issued a statement published by London's Guardian newspaper saying lawyers for his insurance company -- which will pay the money to Allen -- made the decision to settle the case.

"For the record, I personally think we had a good case," Charney said.

Allen filed his suit, asking for $10 million, against American Apparel in March 2008 after the company placed several billboards and online ads using an image of Allen dressed as a Hasidic Jew in his 1977 movie "Annie Hall."

"I sued American Apparel because they calculatingly took my name, my likeness and image and used them publicly to promote their business," Allen said Monday.

"Testimony revealed that American Apparel believed that fear of publicity would keep me from ever taking action, and so they put my face on billboards, on the Internet, and my image on their building," he said.

Charney, who said he finally could talk about the case, said the ad was a "an attempt to at least make a joke about" sexual harassment lawsuits filed against him and his company in recent years.

"Today, two years later, all the claims in the lawsuits have been completely disproven and yet at the time, some writers characterized me as a rapist and abuser of women, others asserted that I was a bad Jew, and some even stated that I was not fit to run my company."

Charney said it was "ironic that I have to explain this to Woody Allen when he has expressed similar frustrations in the past."

Allen's relationship with -- and eventual marriage to -- Previn was scandal material for tabloids beginning in 1992, when she was 21.

Allen said the company's lawyers may have been persuaded to settle because the judge made it "clear that the court considered their phony First Amendment ranting and claims of parody, sheer nonsense."